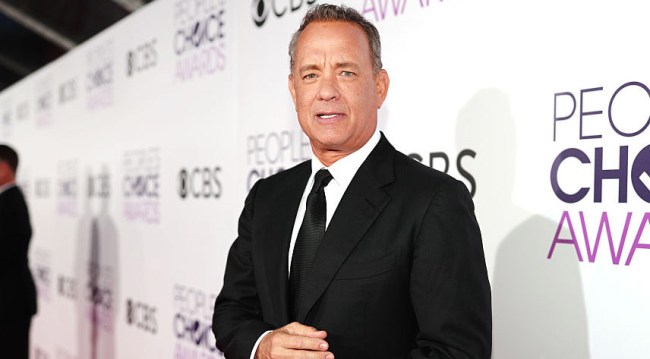 Tom Hanks recently sat down for an interview with BBC Radio 1’s film critic Ali Plumb. To prepare for their chat Plumb visited the “trivia” section of Hanks’ IMDb page. And as Plumb pointed out, these “trivia” pages are usually hilarious, and in many cases complete works of fiction.

So, since he literally had Tom Hanks sitting in front of him, he asked Hanks to verify some of the trivia that’s been posted about himself on his IMDb page. Turns out that in most cases, he couldn’t.

(1) He is not a HUGE Doctor Who fan though he does do a killer impression of a Dalek, as you will see below.

(3) He IS, however, a fan of the Aston Villa Football Club and DOES have one of their shirts with “Hanks” and the number one on it.

(4) His three favorite artists/bands are NOT Elvis Presley, Patrick Rondat and Alabama Thunderpussy. In fact, he has no idea who the last two even are. (Join the club.)

(5) He IS good friends with Bruce Springsteen.

(6) He isn’t sure if there is an asteroid named after him.

(8) He DID once send an espresso machine to the White House press corps. “A free press requires free coffee,” said Hanks.

They closed it out by finding out what it is that fans say to him the most when they meet him on the street. Check out the video below to find out the answer.

Oh, by the way, this still needs to happen, okay?