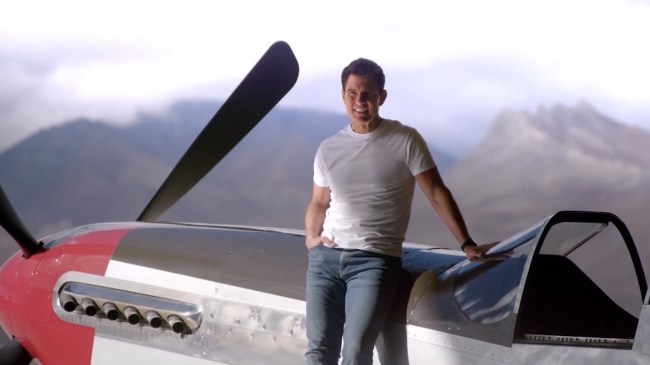 That is the status of Tom Cruise’s P51 Mustang, his own personal airplane that Pete Mitchell is seen both fixing and flying in the mega-hit Top Gun: Maverick.

In this exclusive video to hype up the release of Top Gun: Maverick on digital (TODAY, August 23), the cast and crew of the beloved film — including Jennifer Connelly, who took a ride in the flame-bursting aircraft for herself –wax lyrical about Cruise’s gorgeously classic plane, which apparently would’ve been the “star of the show” had Top Gun been made during the World War II era.

Here’s the official synopsis for Top Gun: Maverick, which is currently the 12th highest-grossing film of all time:

After more than thirty years of service as a top naval aviator, Pete “Maverick” Mitchell (Tom Cruise) is where he belongs, pushing the envelope as a courageous test pilot. Yet, Maverick must confront the ghosts of his past when he returns to TOP GUN to train a group of elite graduates and comes face-to-face with Lt. Bradshaw (Miles Teller), the son of his former wingman, “Goose”. Bitter rivalries ignite as the pilots prepare for a specialized mission, which will require the ultimate sacrifice from those chosen to fly it.

BroBible’s Post-Credit Podcast was also lucky enough to sit down with Jon Hamm around the time of the film’s release, so make sure to check that out below as well:

RELATED: Here’s How ‘Top Gun: Maverick’ Pulled Off Its Mindblowing Stunts Without The Help Of CGI