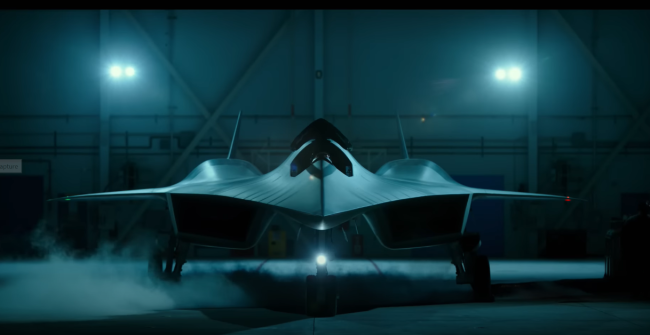 Top Gun: Maverick features a prototype jet codenamed “Darkstar” – which is an alleged upgrade from the SR-71 Blackbird, which still holds the world record set in 1976 as the fastest manned aircraft.

Space.com reported, “To help director Joseph Kosinski and Paramount Pictures, Lockheed Martin’s Skunk Works partnered up with the Top Gun: Maverick production team to engineer what might be an adaptation of their hypersonic SR-72 plane with a few modifications to make it look even cooler on the big screen as both a full-sized physical mock-up and an airborne CGI version. Lockheed Martin’s logo even appears on the pilot’s stick.”

The Aviationist reported, “Lockheed Martin Skunk Works thrives on tackling seemingly impossible work, developing technologies for tomorrow’s challenges before the need is even identified. From creating radar-evading stealth capabilities to X-planes that redefine the sonic boom to many revolutionary technologies in between, Skunk Works has a long tradition of quickly developing enduring innovation for when it’s needed most. When the Top Gun: Maverick team was looking to push the envelope and stand true to Maverick’s need for speed, Skunk Works was their first call. With the Skunk Works’ expertise in developing the fastest known aircraft combined with a passion and energy for defining the future of aerospace, Darkstar’s capabilities could be more than mere fiction. They could be reality…”

Top Gun: Maverick director Joseph Kosinski told Sandboxx News, “The reason we approached Skunk Works is because I wanted to make the most realistic hypersonic aircraft we possibly could. In fact, as you saw, we built it full-scale in cooperation with them. But the reason it looks so real is because it was the engineers from Skunk Works who helped us design it. So those are the same people who are working on real aircraft who helped us design Darkstar for this film.”

The Aviationist reported, “The model they built was so accurate that China was reportedly fooled in believing that it was a real experimental aircraft and even reoriented a spy satellite to take photos of it.”

Filmmaker Jerry Bruckheimer told Sandboxx News, “The Navy told us that a Chinese satellite turned and headed on a different route to photograph that plane. They thought it was real. That’s how real it looks.”

While the movie is fictional, Lockheed Martin believes that the conceptual plane is close to being a reality.

Lockheed’s Ananda Costa told Tech Times, “It’s important to note that Darkstar is a hyper-realistic aircraft concept designed specifically for the movie and is otherwise fictitious. I hope you also spotted the Skunk on the vertical tail of the vehicle.”

James Taiclet – the CEO of Lockheed Martin – revealed that the defense contractor had partnered with Top Gun producers to “bring cutting-edge, future-forward technology to the big screen.”

Filmmaker Jerry Bruckheimer told Sandboxx News, “The Navy told us that a Chinese satellite turned and headed on a different route to photograph that plane. They thought it was real. That’s how real it looks.”