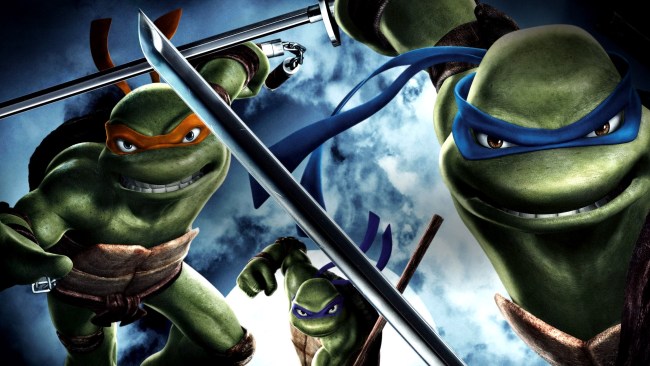 Over the weekend, residents of Toronto were eager with anticipation of what they believed to be the imminemnt arrival of the Teenage Mutant Ninja Turtles after a glowing green sinkhole opened up on a street in their city.

The strange sight some green liquid floating in a sinkhole on Hastings Avenue in Toronto was first posted to Twitter by blogTO and quickly spread as people began speculating about what the strange looking fluid meant.

Nothing to see here – just a sinkhole on Hastings Ave. in Leslieville #Toronto pic.twitter.com/GvOtKzqDal

Some folks were far too rational trying to explain the unusual green goo, but they were quickly and rightfully shouted down by those who preferred to take a most fantastical approach to their responses.

Wrong, that’s the green ooze from which the Ninja Turtles came from pic.twitter.com/2IjnHJY7L4

Of course, the green sinkhole was not signaling the impending arrival of Leonardo, Raphael, Donatello, Michelangelo, and Splinter. (Or was it?)

Instead, a city spokesperson told 680NEWS, “Toronto Water staff inspected the sinkhole yesterday evening. Sinkholes can be the result of a damaged or collapsed sewer.

“In order to determine if the sinkhole is connected to the underlying sewer, a dye test was conducted using a green non-toxic dye, which is added to the sinkhole while monitoring the closest manhole downstream to look for traces of the dye in the sewer.”

Yeah, sure. Whatever you say, bruh.

That’s what they want us to think.

I've been waiting for this moment my whole life! 🙂

But we all know better.

I've seen enough Ghost busters 2 to know where this is going 🤔 https://t.co/K8axHGCZG0

Y’all better be careful seems like wildfire to me pic.twitter.com/35TsEaoh2Y

can't believe the earth is made of nickelodeon slime

Y’all about to have Ninja Turtles in a couple months https://t.co/i2ZGYVWZDp

Oh god it’s the upside down

i live near hastings, i must go find this and throw rocks in it or poke it with a stick.