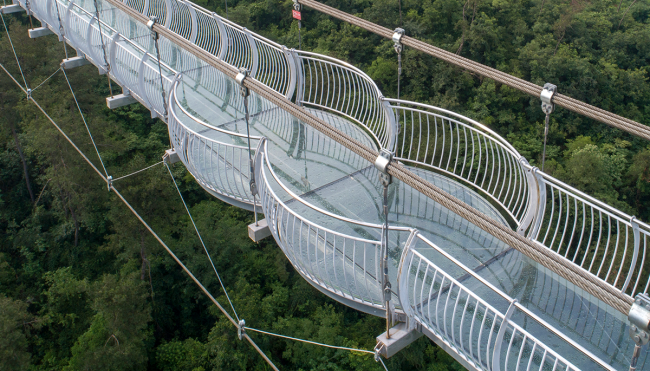 A lot of people seem to describe phobias as an “irrational” fear of a particular thing, which is a definition I’ve never entirely agreed with.

Sure, it might make sense when it comes to referring to people who cower in fear at the sight of a clown or refuse to go into the ocean because they saw Jaws once, but I’d argue that acrophobia—a fear of heights— is a perfectly rational aversion when you consider the human body doesn’t really have any way to defend itself against plummeting hundreds of feet toward the ground to a virtually assured doom.

As far as I can tell, there’s no fancy Latin word for “the fear of bridge made of glass suspended between two mountains,” but based on a situation that unfolded in China last week, anyone who possesses it would appear to be incredibly justified based on what one tourist found himself grappling with,

According to Newsweek, the unidentified man was making his way across the Piyanshan Glass Footbridge last Friday when gale-force winds blowing through the Piyan Mountain managed to shatter multiple panes on the structure he was traversing.

While the one he was standing on managed to endure, that was not the case for those on either side of him, and if the picture of him clinging to the guardrail 330 feet above the ground doesn’t make you a little woozy, you’re a stronger person than I’ll ever be.

A tourist was stranded on a glass bridge in a tourist spot in China’s Jilin province after most of the glass panes suddenly broke into pieces and fell off. pic.twitter.com/175DppgXht

Luckily, the man was brought back to safety after spending around 30 minutes stranded on the span before being taken to the hospital, where he was discharged after doctors determined he’d managed to escape both physically and mentally unscathed.