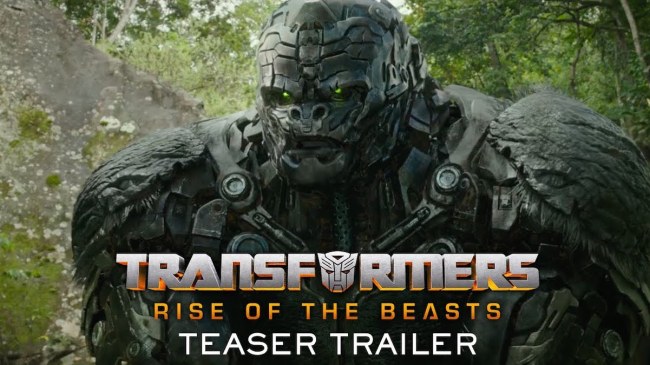 Having been dormant since 2018’s Hailee Steinfeld-starring Bumblebee (which was underrated quite good), the Transformers franchise will officially return next summer with the release of The Rise of The Beasts, which is scheduled to hit theaters in the United States on June 9, 2023.

Ahead of the upcoming holiday slate of movies, Paramount Pictures has unveiled the first teaser trailer for the film, which sees Peter Cullen return as the voice of Optimus Prime. Additionally, Optimus Primal is voiced by Ron Perlman, while Michelle Yeoh is voicing Airazor. Game of Thrones alum Peter Dinklage will also provide the voice for the antagonistic Scourge, the leader of the Terrorcons.

Here’s the official synopsis for Transformers: Rise of the Beasts, via Paramount Pictures:

Returning to the action and spectacle that have captured moviegoers around the world, Transformers: Rise of the Beasts will take audiences on a ‘90s globetrotting adventure and introduce the Maximals, Predacons, and Terrorcons to the existing battle on earth between Autobots and Decepticons

Directed by Steven Caple Jr. (Creed II), Transformers: Rise of the Beasts stars Anthony Ramos (Hamilton) and Dominique Fishback (Judas and the Black Messiah) in live-action roles. The film will be the first in the Transformers franchise to feature Maximals (the animal versions of Autobots) and Terrorcons (which are essentially animal versions of the Decepticons).

As mentioned above, the Transformers series had a bitch of a creative renaissance thanks to 2018’s Bumblebee, so let’s hope that Rise of the Beasts is more of the same.

RELATED: Michael Bay Reveals How Steven Spielberg Tried To Save The World From More ‘Transformers’ Movies