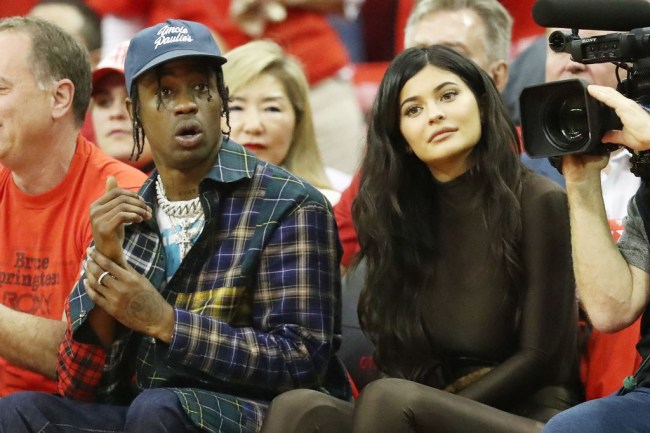 TMZ is reporting that Kylie Jenner caught Travis Scott cheating. The situation is so severe that Travis allegedly cancelled a concert over the reported infidelity.

On Thursday night, Travis Scott canceled his AstroWorld concert in Buffalo because of illness less than three hours before the show. “I’m under the weather and it f*cking sucks!” Scott said in a tweet. “Can’t pull up without full rage.” Try calling out of work tomorrow with the “can’t pull up without full rage” excuse and let me know how that goes. The SICKO MODE rapper rescheduled the show to March 10.

Buffalo I’m so sorry I can’t perform tonight. I’m under the weather and it fucking sucks! Can’t pull up without full rage. Show rescheduled to March 10 all tix are valid. See u soon

However, TMZ reports that Kylie Jenner caught Travis cheating and it forced the Goosebumps rapper to cancel his concert. Scott is rumored to still be in Los Angeles to deal with the allegations of infidelity by his baby mama.

Representatives for Scott have denied that the rapper has been unfaithful. “But, we’re told on Wednesday he flew back from the East Coast to surprise Kylie and Stormi,” TMZ reports. “They were at her home in the evening, when she claimed to discover ‘evidence’ he cheated on her. A major argument erupted and continued into Thursday.”

If the allegations are true, this would continue the tradition of Kardashian women not doing well in relationships. Especially since Kylie is still dealing with her best friend, Jordyn Woods, hooking up with Khloe Kardashian’s baby daddy Tristan Thompson two weeks ago.