Hurricane Harvey Could Be A Category 4 Storm , Cause Deadly Flooding When It Hits Texas 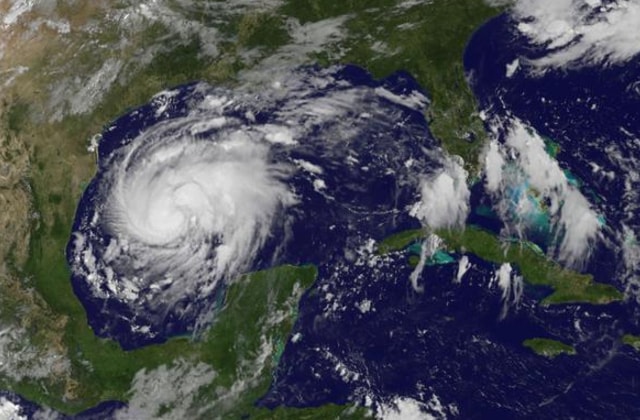 Tropical Storm Harvey has been upgraded to a Category 1 hurricane (74–95 mph) as it bears down on Texas. Harvey has shown no signs of weakening as it prepares to pound the coast of Texas. The hurricane has gathered strength and moisture while in the Gulf of Mexico and Harvey is projected to make landfall on the Texas coast on Friday night as a Category 2 (96–110 mph) or 3 (111–129 mph) hurricane.

People in #Texas should prepare today for #Hurricane #Harvey as winds could be too strong for preparations on Friday https://t.co/tW4KeGdBFb pic.twitter.com/uEOgdtDnQD

The last hurricane to make landfall in Texas was Ike as a Category 2 on Sept. 13, 2008. Some are even saying Harvey could become a cataclysmic category 4 (130–156 mph) hurricane by the time it smashes into Texas.

Not until #Harvey stops intensifying or something inhibits eruption of thunderstorms around center can we discount Category 4+ 🌀 pic.twitter.com/pdINfmMPmd

Intensity guidance for #Harvey continues to climb. Category 3 certainly seems attainable, Category 4 (130mph+) not out of the question. pic.twitter.com/1pm0raz4OE

There is expected to 10 to 35 inches of rain to fall and saturating Texas. There is significant flash flooding possible as Harvey makes landfall and stalls over the state for several days through the weekend into early Monday. The widespread flooding will wreak havoc on streets, highways, bayous, streams, and rivers.

Up to 35 inches of rain possible over SE #Texas through Wed & could cause life-threatening flash flooding https://t.co/tW4KeGdBFb #Harvey pic.twitter.com/qak9ob9WE6

Here's why some areas in southeast Texas could get up to 3 FEET of rain. #Harvey lingers well into next week! pic.twitter.com/6odc7i9fsC

There will be dangerous surf, beach erosion, and damaging winds. The most deadly attribute of the hurricane could be the massive storm surge that pushes a wall of water at the shore.

Dr. Rick Knabb, hurricane expert at The Weather Channel, said of Harvey, “In all these years, it’s rare that I’ve seen a hurricane threat that concerns me as much as this one does.”

.@DrRickKnabb has an important message for anyone in the path of #HurricaneHarvey. pic.twitter.com/CKUTOR3Rr9

A state of disaster was declared for 30 counties in Texas by Harvey by Gov. Greg Abbott ahead of the massive storm.

“Impacts from Harvey will be tremendous in terms of displacement of people, property and economic loss and travel and freight disruptions,” according to AccuWeather Vice President of Forecasting and Graphics Operations Marshall Moss.

The mayor of Corpus Christi told residents in low-lying areas to “get out of dodge.”

Corpus Christi mayor advises residents in low-lying areas to "get out of dodge" ahead of Hurricane Harvey's landfall https://t.co/Gdj5Pm722n

Gas station pumps could go down, power outages could last days as crews struggle to get to all communities because of down powerlines and trees. Please adhere to all warnings and leave dangerous areas if you are instructed to before you are unable to.