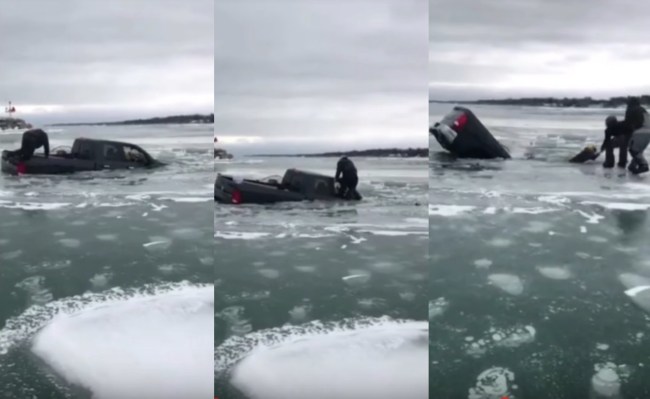 A crazy incident in Lexington Harber, Michigan was captured on camera. A driver lost his truck to the cracked ice, the truck was slowly sinking into the frozen abyss, and the driver clearly wasn’t willing to accept this.

Some nearby ice fishermen had the camera rolling and tried to help the driver escape with his life as the foolish truck driver crawled back inside of the vehicle just moments before it went under and he was nearly trapped in the icy coffin. Instead, the driver was able to crawl up onto the ice with the help of the fishermen and everyone survived the crazy incident.

According to NBC 25 News, this all went down in Sanillac County’s Lexington Harbor on Lake Huron. The footage begins after the truck is already well on its way to disappearing underneath the ice.

NBC 25 said the truck was later towed from the frozen lake and the driver was arrested on suspicion of drunk driving while police awaited the results of his toxicology report. I guess this would be the only explanation for why someone would try to crawl back inside the truck as it was sinking into the frozen lake?

Growing up in Florida, ice fishing is something I really know nothing about. We’ve had snow all of one time in the city where I was raised.

I lived in NYC for nearly a decade and I remember that winter 4 or 5 years ago where we had ice on the ground for like 2 straight months but I still can’t fathom driving a f’n truck on top of a lake. This does not compute in my brain.