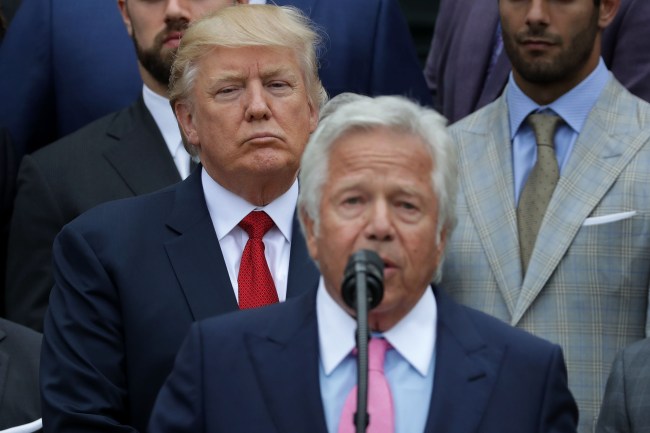 Trump hosts an annual Super Bowl viewing party at his lavish West Palm Beach country club and among those in attendance this past year was the founder of a chain of spas in South Florida, one of which is at the center of Patriots owner Robert Kraft’s prostitution solicitation saga.

Miami Herald investigative reporter Julie Brown exposed a photo of Trump posing with 45-year-old Li Yang, described as a “self-made entrepreneur” who emigrated from China and started a chain of day spas known for sexual dealings.

NEW SCOOP: Trump cheered Kraft’s team to Super Bowl victory with founder of spa where he was bustedhttps://t.co/CqsNwdNRqB

According to the Miami Herald, Yang is attempting to distance herself from the day spa she founded, but is no longer registered to her.

Yang says she had long since sold Orchids of Asia Day Spa, the massage parlor where authorities say they caught Kraft on camera paying for oral sex the morning of the Jan. 20 AFC Championship game — his second visit in 24 hours. (Kraft has denied breaking the law.) Yang, who goes by Cindy, was not charged in the multi-agency anti-human trafficking operation last month that shut down 10 Asian day spas in Florida, none of which are registered to her or her family.

In a brief phone interview, Yang said she and her family have never broken the law, but did not answer questions about whether she knew of the allegations that therapists in her spas were offering sex. She added that she was out of the business,would soon be moving to Washington, D.C., and didn’t want any negative press.

Yang, who records indicate hadn’t voted in 10 years prior to the 2016 election, has become a champion of the Trump administration. Her Facebook is peppered with photos of herself standing with President Trump and his two sons, as well as other Republican figures. She’s attended Republican events up and down the East Coast and since 2017, she and her  relatives have contributed more than $42,000 to Trump Victory, a political action committee, and more than $16,000 to the president’s campaign.

Aaaaah this is too good. He signed it. Respect, @jkbjournalist. pic.twitter.com/9aimVd9nAR

After news broke of the prostitution solicitation last month, Trump has this to say: