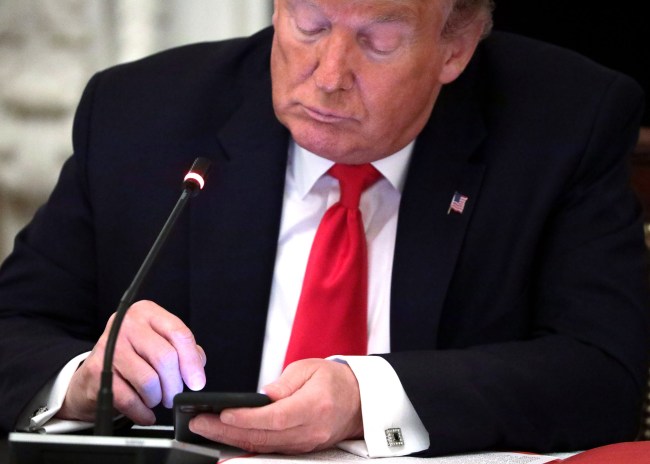 As we get closer to the next Presidential election, numerous supporters of President Donald Trump are starting to get very annoyed with the insulting barrage of texts from him and his minions.

The complaints began when Kurt Schlichter, the author of The 21 Biggest Lies about Donald Trump (and you!), tweeted out last week, “Don’t ever again send me a text that treats me like an idiot. I am hearing from A LOT of supporters of the President that they are getting EXTREMELY insulted and angry at this garbage. Stop it. @parscale @GOPChairwoman cc @realDonaldTrump.”

Apparently, he, and many others don’t appreciate getting texts that read, “ALERT: Pres. Trump texted & YOU didn’t respond. Don’t let him down AGAIN. Stand with Mitch & Trump HERE with 5X MATCH. Only 2 HOURS left.”

Don’t ever again send me a text that treats me like an idiot.

I am hearing from A LOT of supporters of the President that they are getting EXTREMELY insulted and angry at this garbage.

Parscale responded to Schlichter’s tweet by saying, “That’s not a Trump text. We are 88022.”

To which Schlichter replied, ““Well, then you have your people unscrew it with whoever did it since it reflects poorly on your boss. See if I get confused, other people are going to get confused and that becomes your problem. So fix it. Don’t come to a colonel with an excuse. Come with a solution.”

This little back and forth opened up the floodgates for others to lodge their complaints with the texts they’ve been getting from Trump and those claiming to represent him.

I love it when the campaign says it wasn’t them. Did they sell their mailing list to scammers or is it just a big coincidence that they have donors emails?

I've got emails in my inbox with crap like "Why didn't you..."

I've contributed $100. I'll contribute more when I have it.

In the meantime, please don't lecture me about my finances.

I literally JUST had this conversation with a few friends yesterday. I donated twice this month but from a different email than the one that received this. The shaming is getting out of control. We are BRILLIANT, and they are sort of treating us like morons. pic.twitter.com/jz9yI6Yetv

When my government spams me... with a condescending attitude no less... I’m out. Done.

I get these all damn day.. it’s so annoying

I’m still a Trump supporter but I delete everything I get. Too much. I get something every 20 minutes from someone. Hey @parscale Too many texts and emails!

My husband and I were just talking about the texts. We donate to our President and we don't appreciate these guilt texts daily.

I am getting texts from Eric Trump that are just as bad.

Don’t think Trump is alone in this, Democrats are also getting tired of being constantly asked for money.

Are YOU kidding Me??? Ask Bloomberg for more $$, didn’t he say “he will spend as much money as it takes to remove Trump?” You want my money- Give Me Medicare For All ….MEDICARE FOR ALL = REAL SUPPORT FOR A @biden BIDEN CAMPAIGN!