Twitter Is Warring Over Which Is Better, ‘Friends’ Or ‘Seinfeld’? There Is Only One Correct Answer 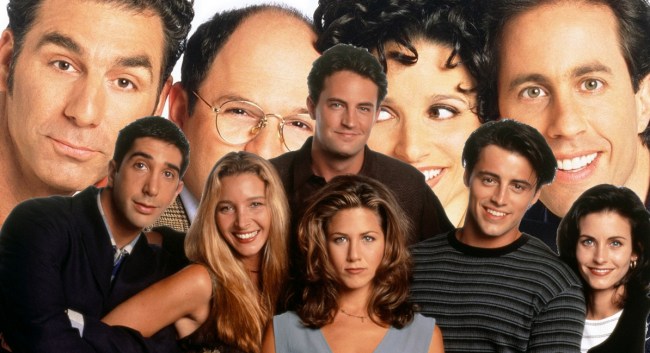 Heads up. Someone on Twitter started a very intense debate over which successful comedy is better: Friends or Seinfeld? This is why the internet was invented.

Of course, this being the internet, there is absolutely, unilaterally, unimstakably, no middle ground here. So, where do you stand?

In one corner, we have Friends, starring Jennifer Aniston, Courteney Cox, Lisa Kudrow, Matt LeBlanc, Matthew Perry and David Schwimmer. Aired from 1994 to 2004 on NBC.

In the other corner, we have Seinfeld, starring Jerry Seinfeld, Jason Alexander, Julia Louis-Dreyfus, and Michael Richards. Aired from 1989 to 1998 on NBC.

So… like I said previously, where do you stand?

OK, let's settle this… 'Friends' Vs 'Seinfeld': Which show is better? pic.twitter.com/a7hLQfwgpY

I think the choice is rather obvious, but let’s see what the Twitter gallery has to say, shall we? We shall.

There are two types of people in this world.

Seinfeld. It’s not even close. pic.twitter.com/p5G8chTSbH

Seinfeld. Not even close. Seinfeld created memes before there were even memes. Yada, Yada, Yada; not that there is anything wrong with it; is he spongeworthy? Festivus for the rest of us; Serenity now

Is this a joke? Even Frank and Estelle were funnier than the whole main friends cast

When someone says Friends is better than Seinfeld: pic.twitter.com/XxXjhlPWbY

This is an insult to Seinfeld. pic.twitter.com/f7gRFsD4U6

Friends all the way weirdos

I'll just say this; Friends was very lucky, NBC needed a show for the half hour that followed Seinfeld. Not a bad show, but many shows like it have failed to find an audience. Friends had their audience delivered to them on a silver platter. #ItsSeinfeld pic.twitter.com/crY5xdehmy

It has been decided. We shall never ask this question again.