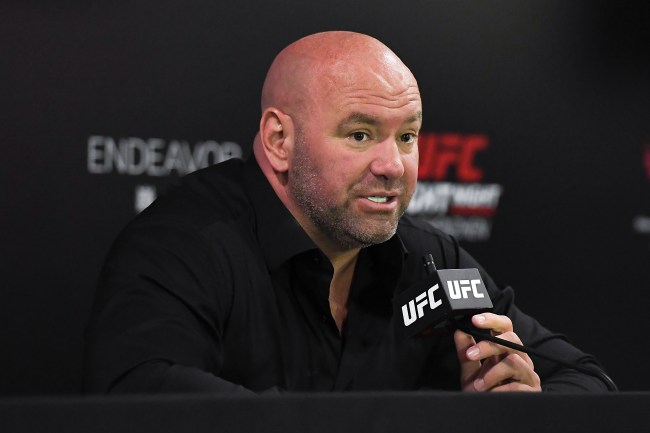 On Monday the UFC made a surprise announcement when they revealed Derrick Lewis was set to fight Ciryl Gane for the interim Heavyweight title at UFC 265 Aug. 7. Ngannou’s agent Marquel Martin released a statement after the announcement by saying that he was “shocked” by the UFC’s decision because Ngannou had offered to fight in September to take some time off for himself.

“Complete shock with your decision after we said September was good for us,” Martin said. “Complete shock that you guys made threats after less than three months after you all were aware. Complete shock after you knew why Francis needed more time. That is correct. I know you’re passionate but you are trying to discredit by integrity when I’ve been nothing but respectful to you, Hunter [Campbell] and your entire staff? Speaks more about you than it does me. I’m not even mad, I’m actually impressed that I’ve gotten your attention.

White caught wind of Martin’s statement and said he was straight up “full of shit.” 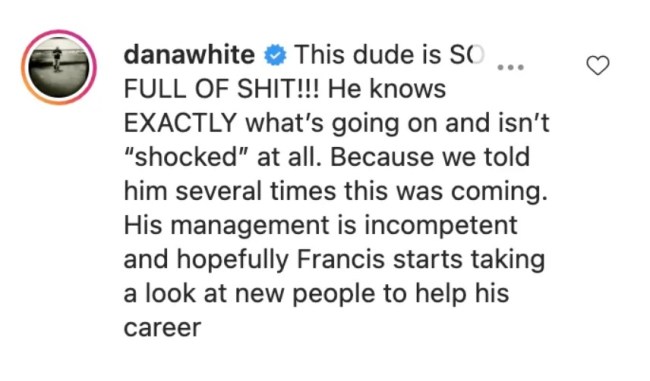 Martin immediately fired back at White over his comments.

“Incompetent management? I think we’ve done a damn good job. I think you really don’t like the fact that Francis is being represented by not only me but an entire agency, one which you can’t control. Hence why you have people tryin to rep him all the time to your benefit. [Laughing crying emoji.] I tell you what, let’s disclose everything for people to see. Emails, calls, texts, everything. Deal? Cause I’m ready to get blackballed by the UFC. I’m not defined by it, you or anyone else for that matter. How’s that sound? Sincerely, your old employee, Marquel Martin.”

Nothing has been right here https://t.co/SIeM9uEfBG