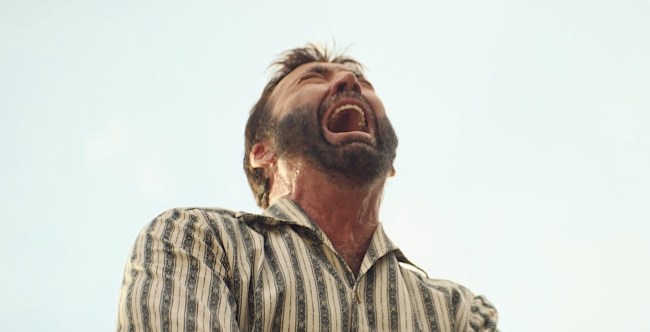 Nicolas Cage has been an A-lister longer than I’ve been alive, and during that decades-long, Academy Award-winning, famously prolific career, he’s developed such an aura, such a cult of personality, such a legendary persona, that it’s virtually impossible to think of a modern actor that’s more beloved for simply being themselves than he is.

This, obviously, is the genius of the upcoming film The Unbearable Weight of Massive Talent, which uniquely and ingeniously understands — given that this is a film that stars Nicolas Cage as himself — that there are few things in modern movie history as fun as watching the beloved Oscar winner turn his famed Cage dial up to 11.

In this exclusive clip from The Unbearable Weight of Massive Talent, Cage’s, um, Nic Cage and Pedro Pascal’s billionaire superfan Javi — who paid the actor $1 million to appear at his birthday in Spain — find themselves on the run with no other moves left but for Javi to heroically (and hilariously) sacrifice himself for Cage’s well-being, who responds by going full Nic Cage in the process, which was, is, and always will be a gift to movie fans.

There aren’t enough good things to say about #MassiveTalent

One of the funniest comedies in recent memory. One of the strangest studio films I‘ve ever seen. Foot-stomping, knee-slapping hilarious.