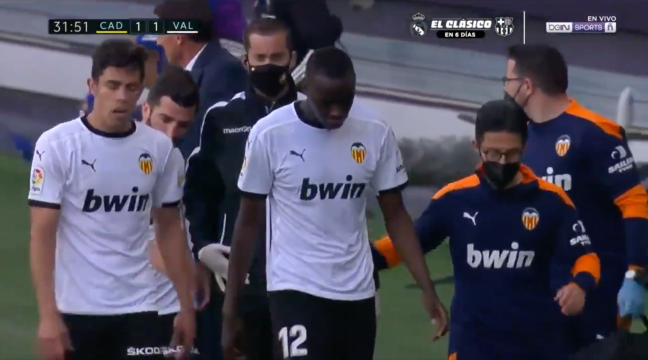 Valencia CF’s entire team walked off of the pitch in the first half of its La Liga match against Cadíz on Saturday after alleged racism was directed at defender Mouctar Diakhaby. The incident began in the 29th minute, with centre-back Diakhaby moving toward the midfield to confront his opponent Juan Cala. As play continued around them, the two got into a headed exchange before the referee stepped in and broke up the incident. 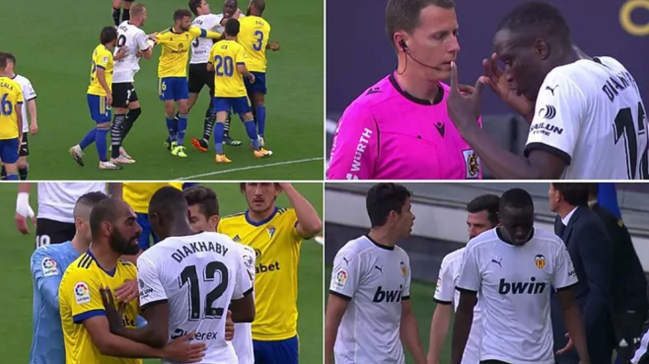 Diakhaby was visibly upset as he explained the incident to the head official, and some of his Valencia teammates went to confront Cala themselves.

Juan Cala …🤦🏻
The Cádiz Player who has been accused of Racist comments ….#CadizValencia pic.twitter.com/qUk0Ejs9U5

After a brief moment, the team congregated near the bench and chose to leave the field together in solidarity.

The Frenchman looked visibly distraught as he made his way down the tunnel, though it is unclear exactly what was said to upset him so greatly. The team held a meeting in the locker room and Diakhaby asked that his players return to the field and continue to play, showing that an incident of such nature has no place in the game. Valencia issued a pair of statements in regard to the incident.

The team have held a meeting and decided to continue the game, in order to fight for the honour of the club, but denounce racism of any kind.#CádizValencia

We offer our complete backing to @Diakhaby_5

The player, who had received a racial insult, requested that his teammates return to the pitch.

WE SUPPORT YOU MOUCTAR

After a 26-minute stoppage, the game resumed with Diakhaby in the stands. Juan Cala, however, continued on for Cadíz. The referee was not able to take action, because the audio was not sufficient enough to be reviewed by VAR, so he was allowed to return to play.

#CadizValencia is underway again. Juan Cala is still on the pitch, while Mouctar Diakhaby has been substituted. pic.twitter.com/QtTiA42c1v

After the game, Valencia’s Javi Gracia said that part of the team’s decision to return to the field was influenced by a threat of sanctions.

Valencia's Javi Gracia: "In the changing rooms we were told if we didn't return, we would be sanctioned."

How can any organisation actually trying to combat racism then seemingly punish teams for walking off amid allegations of racism.

Valencia captain José Gayà spoke about the incident after the game and backed his teammate’s statement.

“Diakhaby mentioned to us there were some insults from the opposition, and we are not going to accept that,” he said. “We decided to leave the pitch and were just waiting to see what was going to happen. We were going to stay with our teammate but we were told we would have to leave the pitch, we came back on the pitch because we were told we were probably going to lose the game. That’s what happened and Diakhaby asked us to return as well and that’s why we decided to come back.

We did what we were told – we were told to come back to the pitch or lose three points or possibly a few more but we did so because Diakhaby asked us to do so.

He told us to continue but he didn’t want to – he’s not happy after the game, he’s quite upset and very hurt.”

While the incident will surely be investigated and Cadiz was forced to consider Juan Cala innocent until proven guilty, his club’s decision to keep him in the game was a direct contradiction of its postgame statement. Cadiz said:

“We are against any situation of racism or xenophobia, whoever the author, and we work for its eradication. All the perpetrators of these crimes, whether or not they are from our team, must pay for it.

We do not doubt the honesty of all members of our squad, who are firm defenders of the fight against racism, whose attitude has always been exemplary in all the matches that have been played.

The club cannot enter into assessments of the issues of the game between the players, and we always demand an attitude of respect and responsibility towards the opponents.”

It’s hard to know exactly what happened in the game, but Cala being allowed to continue in the second half was an interesting decision by the club. Diakhaby has not commented at this time and plans to let the investigation reveal what went down.