‘Venom: 2’ Had To ‘Considerably Tone Down’ A Scene Where A Dude Gets Tongued To Death 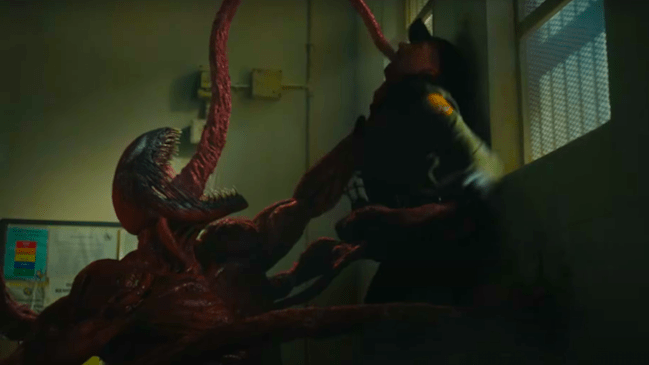 I absolutely loved Venom: Let There Be Carnage. Funnily enough, I actually caught the screener immediately after seeing No Time To Die. No Time To Die ended around 6:00 p.m., so I literally zipped downtown from one Manhattan theater to another in order to make the 6:30 p.m. screening of Venom. Given that it had been such a long day at the theater, part of me considered bailing and heading straight home, but I stuck it out and was rewarded in the process, as Let There Be Carnage is legitimately one of the funniest movies of the year while also being one of the greatest “so bad it’s good” films of all time.

Because of that delicious and ridiculous self-awareness, it should perhaps come as no surprise that the original version of the film was set to be much, much weirder, as VFX supervisor Sheena Duggal revealed to Variety some of the scenes that wound up on the cutting room floor — such as Carnage murdering a dude via alien-symbiote-tongue-down-throat so that Let There Be Carnage could maintain a PG-13 rating.

One sequence inspired from the comic books but deemed too gruesome for the audience was Carnage putting his tongue down someone’s throat as a way to kill them. “We had to tone that back a bit. He does it with a tentacle [in the comics], but I thought it would be fun to have him use his tongue to add that extra gruesome element.” In the end, the sequence was toned down considerably for the big screen. [via Variety]

Now, as you can see by the lead image in this article, one of the trailers out there does show Carnage committing tongue murder, so I can only imagine how gruesome the original scene must have been because the apparently “toned down considerably” moment remained gnarly nonetheless. Give us a director’s cut of Let There Be Carnage, you cowards!

RELATED: ‘Venom: Let There Be Carnage’ Has A Seismic Post-Credit Scene — Let’s Discuss