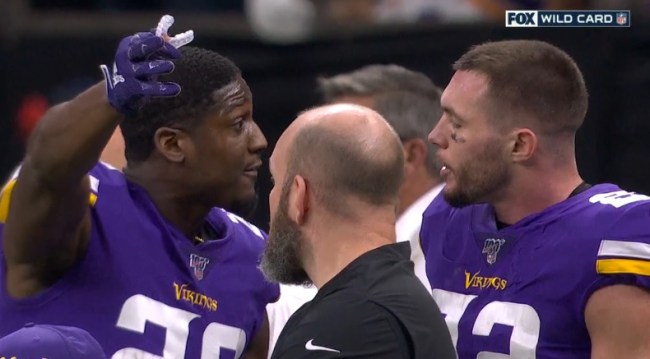 Xavier Rhodes was once considered on the best cornerbacks in the league but he’s fallen off a bit since peak season in 2016.

During Sunday’s playoff game between the Saints and the Vikings, Rhodes was juked off the screen while covering Saints WR Deonte Harris.

He used to be called #RhodesClosed…. not anymore. Deonte Harris sent Xavier Rhodes out of the picture.

After the play, Rhodes was furious on the sideline and appeared to blame teammate Harrison-Smith for the blown coverage.

Xavier Rhodes having a meltdown on the sidelines pic.twitter.com/tZRP4x6oii

Rhodes blaming Harrison Smith when he got cooked is comical

Xavier Rhodes got his ass COOKED at the beginning of that route on the deep bomb & he's got the nerve to be yelling at Harrison Smith.. "Rhodes closed" my ass.

I just saw Xavier Rhodes complaining to Harrison Smith and it looks like he was blaming him… did he watch the replay!? Lmaooo pic.twitter.com/4S0NLlecxv