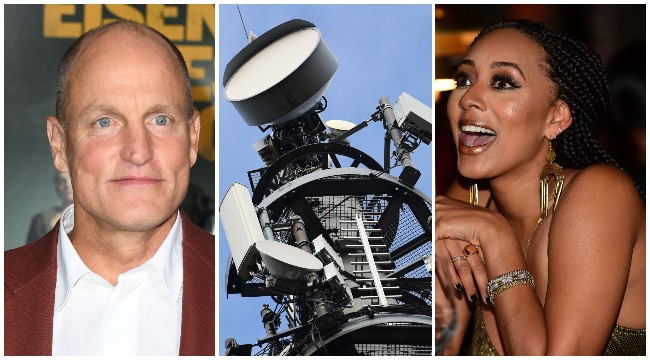 Please put on your tin foil hat before proceeding.

A conspiracy theory touted by stars like Keri Hilson and Woody Harrelson linking the spread of coronavirus to the immunotoxicity of 5G networks has resulted in several telecom masts being set ablaze in the United Kingdom.

The BBC reports that at least three 5G towers were set on fire within the last week, and police and fire services were called to extinguish the flames.

The theory, which spread rapidly on social media before being flagged as fake news, suggests that 5G radiation could be acting as ‘accelerator’ for disease, exacerbating its viral replication or lethality. The theory argues that Wuhan, the center of the pandemic, also happens to be China’s first 5G “smart city” and the location of China’s first 5G smart highway.

On April 1, Woody Harrelson posted a writing to his 2 million Instagram followers from Dr. Martin Pall, PhD, and Professor Emeritus of Biochemistry and Basic Medical Sciences at Washington State University, claiming that the spread of the virus developed roughly as the number of 5G antennae in Wuhan rose from 31 5G base stations in 2018 to 10,000 at the end of 2019 (most of those being 5G LED smart street lamps).

In since-deleted tweets, singer Keri Hilson went on a fear-mongering tweet storm suggesting that the lack of 5G networks in SA was apparently “the reason why the coronavirus isn’t spreading as fast in Africa”.

People have been trying to warn us about 5G for YEARS. Petitions, organizations, studies…what we’re going thru is the affects of radiation.

These theories have begun to spawn real life consequences and has been adopted by the worst woman on the planet.

This is the consequence of those bonkers Facebook conspiracy theories about 5G. Key workers getting harassed on the street. pic.twitter.com/5z35r6sabp

Full Fact, an independent fact checking charity in the UK, has debunked the theory with real science.

Radio waves are found at the low-frequency end of the spectrum and—alongside microwaves, visible light and heat—only produce non-ionising radiation. This means that these waves cannot damage the DNA inside cells, which is how waves with higher frequencies (such as x-rays, gamma rays and ultraviolet light) are thought to cause cancer.

To improve the speed and capacity of our wireless technology, 5G uses a higher frequency of radio waves compared to its older generations. The frequency of this new wireless technology remains very low: the maximum levels of electromagnetic radiation measured by Ofcom were about 66 times smaller than the safety limits set by international guidelines.

Let’s hope no more arson is done in the name of this bonkers theory.