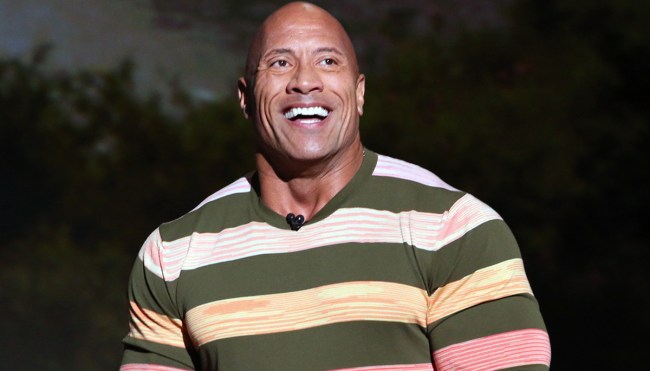 If you possess the willpower to commit to a steady exercise regimen, it’s pretty natural to develop certain habits that become second nature, whether it’s following a dedicated circuit, putting on a certain song when you’re trying to bang out a max rep, or sadly becoming That Guy who can’t help but recite the lyrics out loud while resting.

It should come as no surprise that Dwayne Johnson has adopted some of those habits on his quest to become an Impossibly Large Human Being (which has been successful to a point where he can’t even fit inside certain cars while filming the movies that have made him one of the most bankable actors on the planet).

The former WWE superstar has spent years documenting the grueling workouts he’s harnessed to remain the beast that he is. The bulk of them take place inside his “Iron Paradise,” which is the name he gives to any gym he uses to get swole over the course of his globe-trotting adventures (making the moniker his exercise equivalent of Air Force One).

While each Iron Paradise may be unique, there are certain aspects that unite every single one—like the collection of empty bottles Johnson pees in instead of, you know, taking a break to find the nearest toilet.

Plenty of people were puzzled by that move when Johnson first revealed it back in 2017, but we finally have some insight into his rationale thanks to a recent interview with Esquire.

During the chat, the actor discussed a variety of topics—none of which have garnered more attention than the dive into his choice to pee in bottles while working out (the segment in question kicks off around the 1:20 mark).

“It’s not a water bottle that I’ve purchased solely for water that you wash and you clean when you’re done using it. These are just bottles that I’m no longer using, and usually, the gyms that I work out in don’t have a bathroom.

I’m not going to be the guy to tell Dwayne Johnson what he should and shouldn’t do, so, uh, you do you, man.