Why Is Giving Your Wife Cash For Christmas A Bad Gift? 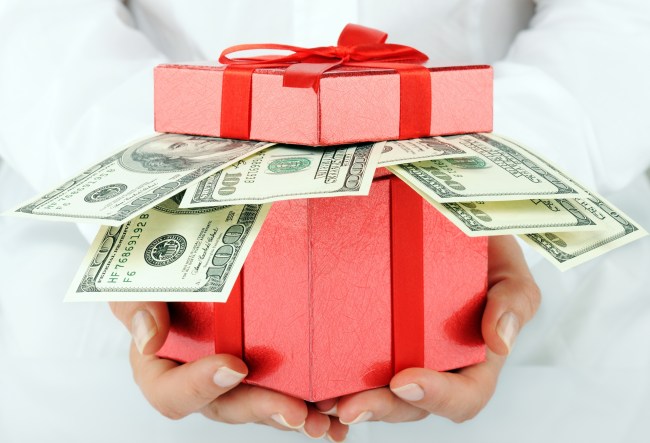 Big debate in the pals’ group chat this morning: is it a bad idea to give your girlfriend/fiancée/wife cash for Christmas?

Universally, we all agreed that it’s not a great idea. But the more we tossed it around, the less we could understand why.

Maybe it’s because we sometimes refer to it as “cold, hard cash.” That takes the warmth out of it, certainly. Not much sentimental value to cash. It can be perceived as the ultimate last-minute panic gift. Grandparents give it to their grandchildren because they can’t keep up with the shifting desires of young people. “Last year it was Legos, now it’s Will Smith’s Big Willie Style? Let’s give up and send that shithead a $50, I can’t be bothered anymore” (based on a real conversation between my grandparents, probably).

If cash its too cold, too sterile, I have a solution: give your lady a big wad of crisp $2 bills, sourced organically from your local post office. Gather up a scarce denomination to make sure she knows you put some work into the gift. If you’re giving her twenties, she’ll know you withdrew from the ATM at the bodega on the corner. But $100-worth of $2 bills? That’s like three mouthfuls of teeth from the tooth fairy. You’d have to fall multiple times on your Razor Scooter to create that sort of exchange, and magically re-grow your teeth TWICE. Three times if you plan to have teeth after the third fall.

That has to count for something. But the group chat wasn’t convinced:

I wonder, friend of mine. How is it that we can give our friends cash, and they accept it gratefully. But to our significant others, cash is “mad disrespectful?” This seems to defy that age-old wedding vow of “you’re my best friend.” If friends enjoy receiving cash from one another, then how can we refer to our partner as a best friend if they feel disrespected by cash gifts? This feels like one of those logic violations from the LSAT I took before withdrawing from law school on the fourth day.

Maybe she gave you a few different ideas of what she wanted. Cash represents all of those ideas! It’s a Genie offering you three wishes, or possibly more depending on how you decide to allocate the money. You are providing the means for choice; the ammunition of option; the power of purchase. Here is $200, enjoy your free will. In that sense, it’s the most enabling gift of all.

In the end, we all will bend the knee and purchase a suggested gift for those we love. Mostly because it’s actually easier now to order something from Amazon than to walk to the post office for that sweet roll of twos. At least framing it that way makes us feel better. Small victories, I suppose.