Winter Is Here: Arctic Blast To Bring Piercing Low Temperatures And Break Hundreds Of Records Across US 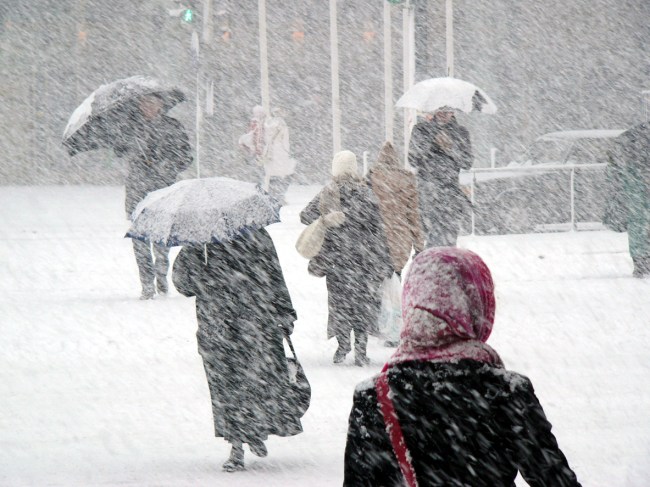 Winter doesn’t officially start until December 21, but the upcoming forecasts for much of the United States show that winter weather is already here. A massive arctic blast is hitting the country with record low temperatures and snow weeks before Thanksgiving.

Over the week, more than 67 million Americans will be under winter weather alerts. The National Weather Service predicts that approximately 300 record lows could be tied or set from Monday to Wednesday. Keep in mind that many of these records are from the 1800s.

An estimated 300 records are expected to be broken/tied for the upcoming cold between Monday and Wednesday. pic.twitter.com/SrtzWuzP2f

Currently, the massive cold front stretches from the Southern Plains to the Northeast. As of Monday morning, Malta, Montana, was the coldest place in the country with a bone-chilling temperature of -24°F.

Here's a look at the current temperatures as of 8:30 am EST. The cold front currently stretches from the Southern Plains to the Northeast. As of 7:00 am EST Malta, Montana was the nation's cold spot at -24°F. pic.twitter.com/G3xXCQGfDt

Here it comes! Look at those wind chills up north, is it January? Less than 24 hours until the Arctic air arrives. #lawx pic.twitter.com/TAfaAVVKI0

The winter chill will bring piercing cold to the Deep South and even Gulf Coast states, where over a dozen record lows could be set in the next few days.

Here comes the "Arctic blast"
Over the next 4-days, abnormally cold air (record cold) will descend upon the Lower 48 thru Texas to the Gulf Coast.

The "coldest" actual temperatures will be over the Great Lakes leading to heavy "Lake Effect" snow.

Ever wondered what an Arctic Blast really looks like? The next 24 hours over Texas and Louisiana is it… #lawx #txwx pic.twitter.com/oeGNNnaYZ5

Some of my favorite graphics are the ones that show temps crashing through the day. Here's a prime example. @FeliciaCombsTWC & I will show you who else is in line for big drops. 9am-1pm ET on the @weatherchannel. #HowLowCanYouGo pic.twitter.com/4XeyiDvRAR

The Midwest will experience freezing temperatures and troublesome snowfall, especially areas near the Great Lakes. Chicago is expected to get as much as six inches of snow. Up to 12 inches of snow is forecast in Traverse City in Michigan and upstate New York near Rochester because of the lake effect.

Multiple records for cold and snow may be set in #Rochester over the next 48 hours. #OhWhatFunItIs pic.twitter.com/1NviEEgiWD

Snow will overspread the region overnight and persist through Monday evening, and into Tuesday near the lakes.

Travel will likely be slow going tomorrow. Travel may be impossible at times in areas in pink. pic.twitter.com/vbwgwNNHYZ

Chicago is already dealing with frigid temperatures, ice, and snow. At Chicago’s O’Hare Airport, where the wind chill is 8°F, an American Airlines airplane slid off the icy runway. There was reportedly no major injuries.

❄️Here are some of the latest snowfall reports this morning out of Iowa. Snow still coming down in the eastern part of the The Hawkeye State. ⛄️ #Snow #IAWX pic.twitter.com/wqBV8G5VPF

Most of the areas affected by the winter blast will only experience light snow accumulations of an inch or two.

By Wednesday, the cold front will move to the East Coast, where temps are expected to be 30 degrees below average. The Arctic air will cause wind chills to plummet to the low teens and single digits.

.@AlRoker brings you the latest on the record-breaking winter weather that's sweeping across parts of across the country. pic.twitter.com/e0p2OgE1hg