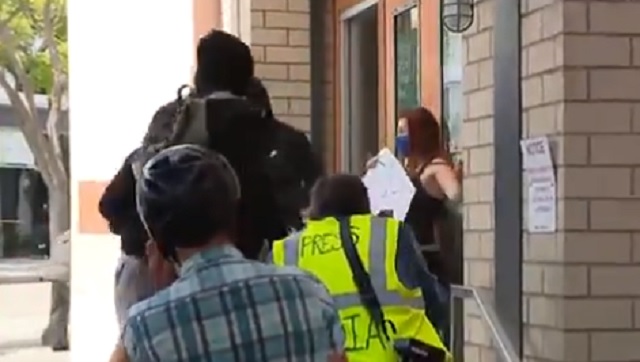 Looters attacked a local REI during protests in Santa Monica on Sunday afternoon but their plan was foiled by a couple protecting the store.

In the videos below you can see a woman getting tossed around by looters as she attempts to block them from breaking the store’s windows.

A woman was standing in front of the REI on 5th and Santa Monica, trying to prevent looters from breaking the glass. They viciously pulled her arm away, tossing her aside as they broke in. The woman was holding a sign reading, "End all violence."

Scary scene in Santa Monica as people are trying to protect businesses from looters. pic.twitter.com/83gFVY8zkT

Her friend eventually was able to back her up and stood next to her as the looters scurried off.

The woman spoke to Fox LA about why she decided to stop the looters from breaking into the REI.

As looting takes place in Santa Monica on Sunday, a couple of protesters put their lives in danger by standing in front of the REI store to stop the ransacking. More info: https://t.co/f5veEdZl6p pic.twitter.com/eqRgBduFCf

Wwe’re here for the protests but when we see people looting it defeats the cause so we decided we would come here and if we see anything happen, any violence or anything that shouldn’t happen, we’re going to try and best and stop it