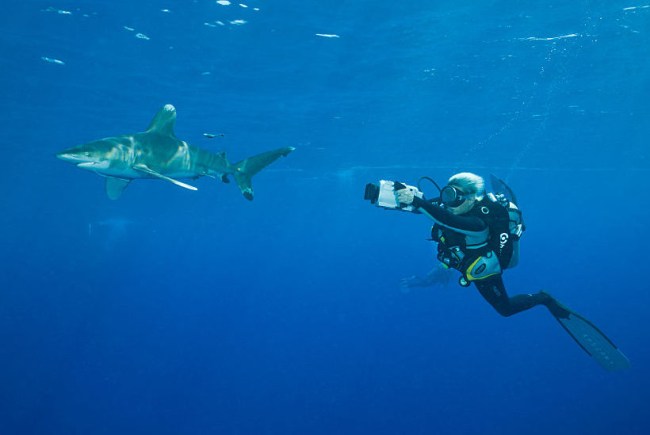 Every once in a while, a movie comes along that manages to scare the everloving shit out of audiences and terrify many viewers to a point where they walk out of a screening or sit paralyzed on their couch as the credits roll after being suddenly burdened with a brand new fear they didn’t have a couple of hours before.

For example, anyone who’s seen Final Destination 2 will immediately nope the fuck out if they ever find themselves driving behind a truck hauling a load of logs, The Omen made it impossible to see a small child stare at you for more than five seconds without assuming they’re plotting your murder, and even though clowns are inherently terrifying, It did a great job making everyone’s coulrophobia even more crippling than it already was.

However, there is perhaps no movie that managed to scar more people more severely than Jaws, which did what it could to give moviegoers some heads up about what they were signing themselves up for with a tagline that warned “You’ll never go in the water again.” It may have sounded hyperbolic but I guarantee there are people who haven’t stepped foot into the ocean since leaving the theater on one fateful day in 1975

Jaws paved the way for the many films that have taken advantage of the fear of sharks that it managed to instill in so many of us, but just like most phobias, all you need to do is take a look at the numbers to realize the panic is extremely overblown (statistically speaking, you should be more afraid of cows based on how many more people they kill per year).

Peter Benchley said he regretted writing the book the movie was based on, and after shark hunting became all the rage in the wake of the film, he devoted much of his life to promoting conservation and attempting to get people to realize sharks aren’t constantly patrolling the seas dealing with a scratch that can only be itched by eating human flesh.

“Shark Week” may no longer be the sensation it once was but anyone who looked forward to the stretch of days where Discovery Channel pivoted to an “all sharks, all the time” format was treated to a similar message courtesy of people who have no problem scuba diving in the vicinity of a feeding frenzy or petting a great white as it swims by the cage they’re in.

A group of filmmakers in Australia is currently working on a shark documentary of their own with the help of 29-year-old Anika Craney, who traveled to the northeast corner of the country to assist in its production. According to 9 News, she was given the day off from shooting on Tuesday and spent it chilling on the coast of Fitzroy Island, where she went for a swim that came to a premature end after a shark chomped down on her lower leg.

Doctors from a resort on the island quickly came to her aid and she was eventually airlifted to a hospital on the mainland to receive treatment for a possible ankle fracture. She seemed to be in good spirits considering the circumstances and told reporters on the scene that the incident hadn’t soured her opinion of sharks one bit.

"I still love sharks, sharks are beautiful!" says the 29yo shark documentary maker, just minutes after being mauled herself off Fitzroy Island. #9News @9NewsQueensland @9NewsFarNthQLD pic.twitter.com/rPrMUvprOE

I think she’d be more than justified in being pissed at the particular one who bit her but props where props are due for a being a bigger person than I’ll ever be.