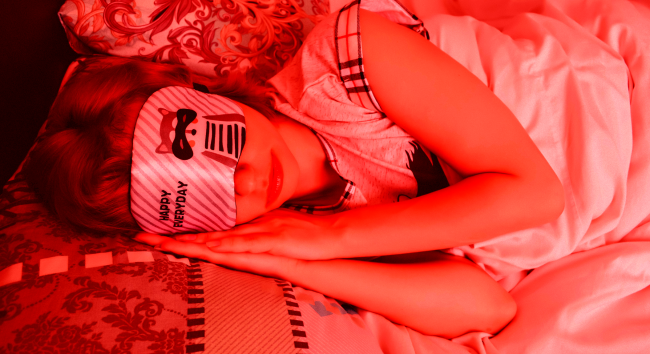 Tis the season for creepy stories and it doesn’t get much creepier than this.

TikToker Reagan Baylee (@reaganbaylee) went viral awhile back, garnering almost nine million views for her story about the time she slept three feet away from a dead body for two months and didn’t realize it.

How could something like this happen? Well, it all began during the height of the pandemic in May of last year when basically the streets were empty and no one was leaving their home.

Reagan Baylee, at that time, was living in a tiny 250 square foot studio apartment in Los Angeles. It was there that she says she started to notice an unusual smell and around that same time started to not feel well.

“I was having headaches, I wasn’t really sleeping through the night, I was feeling nauseous a lot and honestly, we all kind of wrote it off as me just feeling a little lonely and going a little crazy during quarantine, just like everyone else was,” Reagan explains in part one of her story on TikTok.

“It was really unlike me to not be able to sleep through the night so I thought this was really strange but again I just kind of wrote it off because I just thought I was really sad and depressed.

“Throughout the month of May I noticed that I had, like, an uptick in the amount of bugs in my apartment, which was very unusual because I’m extremely tidy and there’s never bugs, but I noticed there were a couple of spiders here and there throughout the month, but again, I didn’t really think much of it because it was really hot, it was the middle of summer and sometimes this happens.

At some point Reagan decided to speak with the manager of her building about the bugs, and then again later about the occasional bad smell.

“Truthfully, my best description of this smell was kind of like a dead fish so I thought that maybe a bird had caught a fish, which in retrospect is the most stupid thing ever because there’s no lakes anywhere near me,” Reagan continued.

“I started thinking maybe my neighbor who lived to the right of me had like, his dog had died or something had happened and I got really worried, but my manager told me she can’t just start knocking on neighbors doors and bothering them. But I had this really bad feeling that something was super wrong and the smell was getting really bad every time it was windy and I was really, really worried. But remember, it’s the middle of the pandemic and we had been home 24 hours a day, seven days a week so I think I had gotten kind of used to the smell.

At that point she decided to have her boyfriend come over, which he hadn’t been doing because of COVID, but when he arrived he agreed that the smell was “horrific.” Then, after staying with her for a week, he too began suffering from not being able to sleep through the night and feeling nauseous.

That’s when she called the police and had them come over to do a wellness check. Unfortunately, they were only able to check the apartment of her other next door neighbor where they actually answered the door.

“I consulted the police and they told me after 48 hours, if my manager didn’t convene then I could call them again,” Reagan continued. “And this is when things got crazy. I felt like I was on a mission because no one was listening to me and manager was making me out to feel crazy.”

In part two of her story, Reagan explains that she did finally convince her building manager to have a maintenance man check on things.

When he arrived, “within minutes” he knew something was terribly, terribly wrong.

“He’d walked up the stairs, he couldn’t even make it up the stairs without starting to vomit. He ripped off his mask and said ‘I am going to get the master key, someone is dead.’ I immediately start freaking out because I felt so validated after weeks and weeks of feeling crazy and complaining, and no one believing me.”

Still, no one associated with the building was doing anything to find out what was going on, so she ended up calling the police again.

“There’s six cops they all have their guns drawn and they say, “LAPD, exit with your hands up raised in the air, you’ve got 30 seconds, we’re going to start counting down.’

“Right before the end of the 30 seconds, one of the cops says hey let’s draw down our guns, can anybody just try to open the door and see if it’s unlocked,” she continues.

“And I was like ‘why would it be unlocked?’ Brace yourself… So the cop twists the doorknob and he opens it maybe an inch. The amount of bugs that came out of this unit, it looked like 1,000 bugs, thousands of them, flying out of the unit.

“They immediately slam the door and the cops called for a ton of backup. The cops started ripping off their masks and multiple of them were throwing up over the side of the railing. I slammed my door and they told me to stay inside and don’t come out.

“Long story short, they said this was the worst decomposed body they had ever come across and they see a lot of decomposed bodies. I’m not going to go too into the specifics of it, especially for the privacy of the person, but let’s just say they were liquefied and they were basically a skeleton at this point.

“All the symptoms my boyfriend and I were experiencing were simply because of the fumes and toxins that were releasing from the body and the natural gases that were making me extremely sick during pretty much all of quarantine.”

And that’s how this woman slept three feet from a dead body for almost two months without even knowing it.

Oh, and in case you were wondering, yes, her bed was butted right up against where the dead body was located in the other apartment.

She also answered numerous other questions in a series of followup TikTok videos so if you are interested you can view those here.