Wordle, The Internet’s Latest Obsession, Is Also Its Best New Meme: A Primer 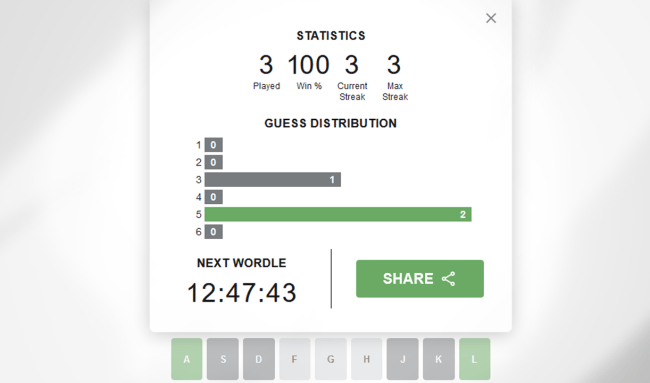 If you have spent any significant amount of time on the internet and social media over the past couple of weeks then you are very well aware of a online game called Wordle.

You have six tries to guess a five letter word. Each time you guess, the game tells you which letters are correct and the color of the tiles will change to show which letters that are correct are in the proper order. A letter becomes yellow if it is in the word, and turns green if it’s in the right place.

It’s a fun and challenging little game. It’s free to play. It can also be frustrating and addicting, which can be a problem since once you complete the game, you literally have to wait until the next to be able to play it again.

Once you complete the puzzle, Wordle reveals how well you’ve been doing and provides an easy to share image that has been appearing all over social media.

Well, this was annoying…

All of this has combined to make Wordle not only very viral on the internet, it has also created the perfect storm for creating a wide assortment of memes.

According to a recent New York Times story, Wordle was actually created (sort of, more on that in a moment) by, wait for it… a guy named Josh Wardle.

He released the game in October of 2021 and by November it had 90 players.

“I think people kind of appreciate that there’s this thing online that’s just fun,” said Wardle. “It’s not trying to do anything shady with your data or your eyeballs. It’s just a game that’s fun.”

I've no idea what Wordle is or how it works but I like seeing everyone's little squares nonetheless pic.twitter.com/yX3jcmPQXm

Unfortunately, we don’t have any record of whether or not the game show Lingo generated any memes. Wordle on the other hand…

Me not understanding all these wordle pics but happy everyone's having a good time pic.twitter.com/prUTMb6zRU

I'm not very good at Wordle

I made a Wordle meme pic.twitter.com/wtG19miQBv