A Deeper Look At The 2020 Xbox Series X Game Reveals 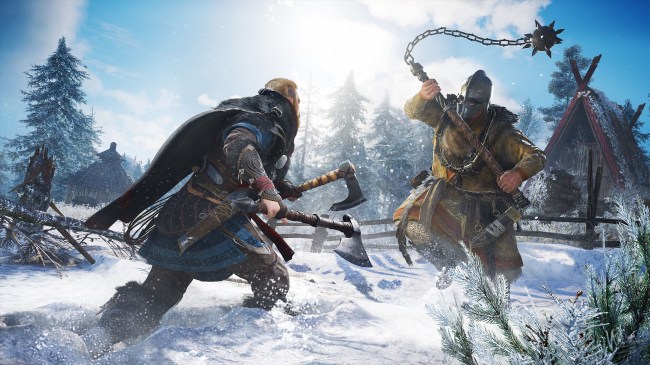 The Xbox Series X has promised to deliver an unprecedented gaming experience, ushering in the next console generation with a potent combination of creativity, innovation, and technology. But while Microsoft’s upcoming machine might dwarf the Death Star station in terms of raw power, many of its potential-packed features – from lightning-quick load times to faster frame rates – don’t necessarily translate well into gameplay videos.

With that in mind, we’ve taken a closer at the system’s recently announced titles with an eye not just on their graphical fidelity, but what else makes them stand out from the crowd. While all the reveals featured retina-searing visual presentations, it was the following elements that have us excited to look beyond the games’ pretty facades.

The long-running Assassin’s Creed series has always been about eliminating foes silently and/or violently from behind an arsenal of sharp and pointy objects. While previous entries have allowed fans to wield everything from hidden blades to lengthy spears, the Viking-themed Valhalla appears to be upping the ante – and, presumably the gore – with protagonist Eivor’s ability to dual-wield axes. Whether opening baddies from brain-stem to bellybutton up-close or splitting their skulls from afar with a well placed throw, this deadly, new dual-wield skill looks like reason enough to visit England’s Dark Ages.

The reveal trailer for Chorus features a slick starship, its badass, female pilot, and plenty of special effects-spewing destruction caused by the two. It’s the unique relationship between the protagonist and her sentient space craft, though, that’s got our interest piqued. At one point, the former gently touches the latter – not unlike a cowboy stroking its faithful steed’s face – hinting at a mysterious bond that will no doubt inform this sci-fi shooter’s story and gameplay. If the Xbox Series X can make us cry over a space-ship, consider us sold.

Scorn is billed as a first-person horror adventure that tasks players with navigating a non-linear, dreamlike world. Based on the reveal trailer, though, its disturbing art style is its defining, nightmare-conjuring feature. An unsettling mix of gore-soaked sci-fi and the sort of imagery that could make H.R. Giger soil is skivvies, its striking visuals are the kind of thing you might see right before waking up covered in sweat. If this is what next-gen horror looks like, we’re keeping the lights on.

The Ascent’s announcement trailer immediately pulls you in with its intoxicating mix of Blade Runner-esque settings and characters, coupled with the kind of appealing vibe inspiring the upcoming Cyberpunk 2077. While these elements will surely sting the senses of any genre fan, however, its the isometric, action RPG co-op gameplay – essentially making this one a sci-if Diablo – that’s got us excited to lock, load, and lay waste to evil cyborgs.

Developer Bloober Team is no stranger to scaring the pants off players, previously preying on their fragile psyches with Layers of Fear, Observer, and Blair Witch. But the new hardware seems to have offered them an opportunity to up the bone-chilling immersion. The Medium unfolds in both the real and spirit worlds, an element that comes into frightening focus in its announcement trailer. The tease begins with a smiling woman getting an ultrasound of her unborn baby…before switching to a scene of her sobbing in a church that’s ultimately obliterated by a force that could put a nuclear blast to shame.

As its name suggests, this cinematic role-playing game sequel is all about pop culture’s favorite blood-craving creatures of the night. And while fangs are bared and jugulars drained in its Xbox Series X reveal trailer, it also hints at a much darker, disturbing take on these familiar tropes. Most notably, the teaser – creepily scored to Wayne Newton’s Danke Shoen – features vampires more evocative of serial killers than the romanticized monsters of classic horror movies.

If you only stuck around long enough to see the cocking shotgun that kicks off Second Extinction’s reveal trailer, you could be forgiven for dismissing it as another over-the-top, me-too military shooter. If you watched long enough to see the evil mutant dinosaurs, however, you’re aware this may be the best game ever. Focused on cooperative play, it drops you and a few dino-blasting buddies into levels overrun with prehistoric mutations, before tasking you with wiping them out and escaping via chopper.

Sporting a stylized visual presentation, adrenaline-pumping action, and screen-consuming boss battles, Scarlet Nexus looks tailor-made to take advantage of all those horse’s beneath the Xbox Series X’s hood. The focus on fast, dynamic combat – powered by psionic abilities – seems like an especially good fit for a console hellbent on cranking frame-rates and eliminating immersion-breaking load-times. Toss in the opportunity to lay waste to high heel-wearing human/plant hybrid mutations, and this one’s got our attention.

While the Yakuza series has long allowed fans to live out their Japanese underworld fantasies, it’s typically been a bit rough around the edges. Xbox Series X launch title Yakuza: Like A Dragon looks to remedy this, retaining the epic combat, engaging story-telling, and content-packed environments that’s made the franchise a massive cult hit, while slathering on plenty of detail-drenched polish. All that, and the protagonist’s signature weapon appears to be a barbed wire-covered baseball bat possessing otherworldly powers.

Call of the Sea

The majority of games so far revealed for the Xbox Series X aim to inject some fresh life into the action and horror genres, making Call of the Sea especially stand out from the pack. The one literal bright spot among the dark, dystopian line-up, the color-bursting first-person adventure hints at the hardware’s ability to power experiences that think outside the, er, Xbox. Forgoing fragging and frights for story-telling and puzzle-solving, the promising entry could serve as the perfect palate cleanser between sessions spent saving the world and surviving mutated velociraptors.