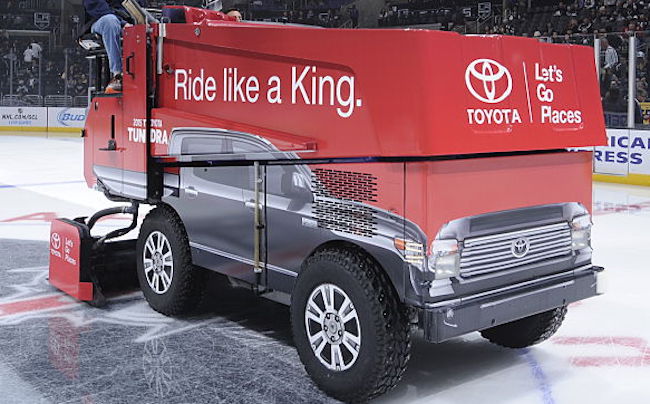 There are a number of simple things in life that provide far more pleasure than they have any right to, like using a pressure washer to clear away years of grime, absolutely going to town on a bunch of bubble wrap, and seeing the DVD logo hit the corner of the screen after spending way too long watching it bounce around.

Attending a hockey game in person isn’t exactly the most serene experience in the world but there are a couple of oddly satisfying moments that take place during various breaks in the action. The army of people with shovels dumping ice shavings into buckets in the middle of a period can be strangely engaging but that doesn’t come close to measuring up to seeing a Zamboni do its thing in between them.

Anyone who’s mowed a lawn knows the incredibly fulfilling feeling that comes with managing to make your way up and down the grass without having to backtrack a single time because you fucking nailed every single turn. However, there’s a bit of a difference between navigating a tiny tractor around a yard and hopping behind the wheel of a giant machine and guiding it around a sheet of ice, so I respect the hell out of every driver who’s managed to master the art of smoothing a rink.

I also respect the hell out of anyone who refuses to abandon ship after their Zamboni bursts into flames, which is the situation that unfolded at Bill Gray’s Regional Iceplex in Rochester, New York earlier this week. What appeared to be a pretty routine resurfacing took a bit of a turn after the rear of the vehicle was engulfed in a sizeable fire, as evidenced by a few videos that captured the incident.

A scary moment after my son’s practice tonight at @bgiceplex. Grateful everyone is safe! #rochesterny pic.twitter.com/SihYnTWhFR

For real…did NOT have zamboni fire on a Rochester ice rink on my 2020 bingo card 😳 pic.twitter.com/as8nq5nISJ

According to the Democrat and Chronicle, the driver managed to guide the Zamboni into a maintenance area where he was able to extinguish the miniature inferno. He somehow managed to emerge unscathed so he might want to be on the lookout for a guy in a wheelchair with bones made of glass intent on kidnapping him in an attempt to harness his seeming invincibility.