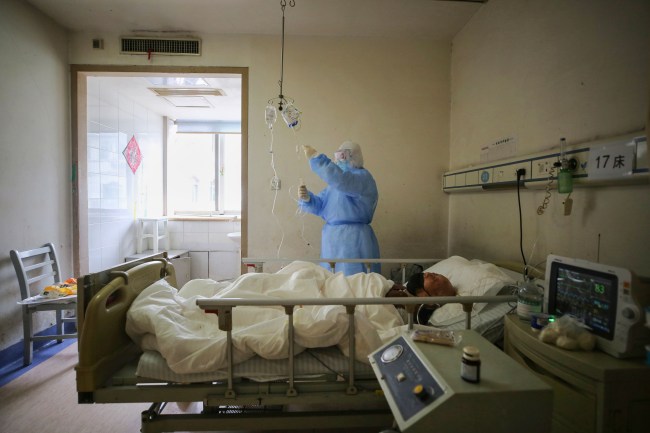 According to the Independent, Zhang Guangfen is healthy as a horse after receiving treatment for just six days at a hospital in Wuhan. The recovery was aided by the 103-year-old having no underlying health conditions outside of mild chronic bronchitis.

Mrs. Guangfen became the oldest known person to recover from coronavirus, days after a 101-year-old man also beat the virus in Wuhan.

A video released from Wuhan depicts Guangfen being escorted out of the hospital by a group of medical workers. When she first entered the hospital on March 1, she was in critical condition and could barely communicate with the doctors.

The nurses took turns to spoon-feed the patient and change diapers for her, said a matron, Liao Zhenhui, to local media Chutian Metropolis Daily.

‘The grandmother loved being complimented by the nurses,’ the matron continued.

‘She would smile and nod every time after I told her she looked pretty.’

Arguably more impressive than Guangfen’s recovery was the complete recovery of a 100-year-old man with Alzheimer’s, hypertension and heart failure who recovered in the Chinese city this week after being treated by military doctors.

While the common perception is that older people are as good as gone if infected with the virus, Professor Chris Whitty said last week that the great majority of the elderly will survive it–over 90 percent.

The most recent numbers at the time of this writing indicate that coronavirus has killed at least 3,158 people in China alone and 4,325 worldwide, according to experts. It has affected nearly 120,000 people in a dozen countries worldwide.

Congrats to Zhang Guangfe and those around the world who are showing coronavirus who’s boss.