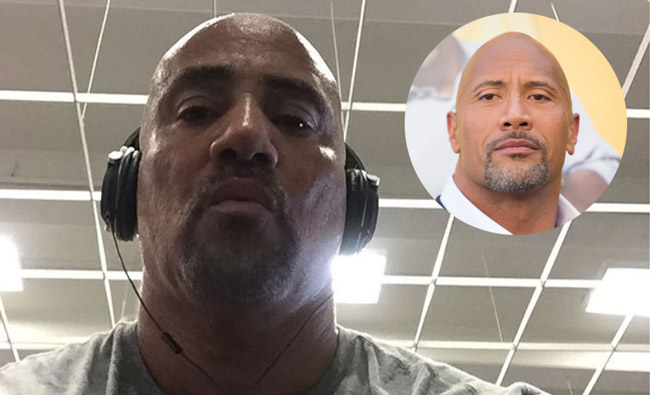 Here’s an fascinating little story for you.

A man named Alvin Streeter from Atlanta somehow lucked his way into becoming the stand-in for none other than Dwayne “The Rock” Johnson in a bunch of his movies.

Apparently there are a lot of movies and TV shows shot in and around Atlanta so back in 2015 Streeter took some time off from his job as a district manager for Home Depot when a friend suggested he do some background work on movie sets.

He did and ended up getting some jobs appearing on a few TV shows.

Then in 2016 Streeter once again decided to apply for some background work, this time for the upcoming movie Baywatch, reports CNBC.

“I never heard anything, so I went on about my business,” says Streeter. “Then I get a call around mid-March asking if I’d like to come down to Savannah and stand in for Mr. Johnson. I didn’t know what they were talking about at first. I thought it was a prank call.”

He headed down to the movie set in Savannah, Georgia, met Johnson and his team, and, “to my surprise, there was a lot of similarity,” Streeter says. Johnson’s team agreed. A few weeks later, they asked Streeter to stand in for Johnson’s next movie, “The Fate of the Furious” (2017).

So what’s it like for a regular Joe to get to work with the highest paid movie star in America?

“We’re not best buds. We’re friends,” Streeter says of Johnson. “We engage and we talk to each other on the set. It’s really a business relationship, to make sure the shot is right.”

It helps that Streeter admires Johnson’s work ethic. “He’s grinding every day,” says Streeter. “There’s an intensity when you’re working around him and you can see it and feel it in the air. He’s going 150 miles an hour every day. I thrive on that. That’s how I work, so I love that environment.”

And while The Rock has an “official” stunt-double, sometimes Streeter gets to do a few stunts himself, calling it the coolest part of his job.

Not too shabby a side-gig for a Home Depot district manager, huh?

Hmmm… I wonder if he has ever heard The Rock call Vin Diesel a candy ass?

Check out the rest of Streeter’s story over at CNBC.