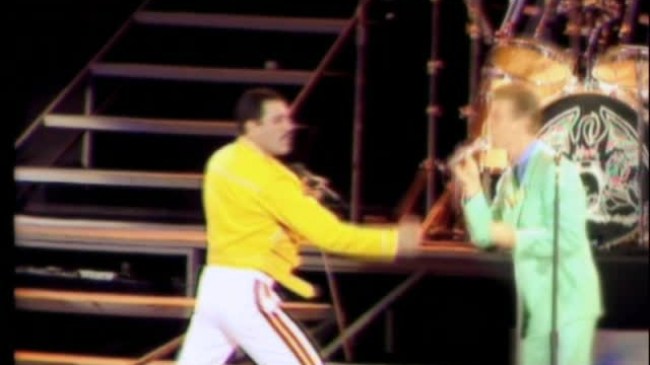 There are people who are very close to Queen, including members of the legendary band, who claim that there are more songs that Freddie Mercury and David Bowie sang together besides “Under Pressure,” the collaboration that became a rock institution. Rolling Stone readers declared that “Under Pressure” was the greatest duet of all-time.

In July 1981, David Bowie headed over to Montreux’s Mountain Studio to record a track with Queen. He originally planned on singing on “Cool Cat,” but the session didn’t gel. Luckily, the four members of Queen and Bowie started jamming on a new piece that soon morphed into “Under Pressure.” The whole thing came together within a matter of hours, though there’s a dispute to this day over who exactly came up with the iconic bass line. The song became a worldwide hit, though the never performed it together live — even though Bowie’s set immediately followed Queen’s at Live Aid.

Peter Hince, a former Queen roadie who served as head of their road crew at the time of the historic jam session, and says that the two exalted singers recorded many more songs together. Hince said he was at the remarkable recording session that took place at Queen’s Mountain Studios in Montreux, Switzerland, near Bowie’s home in Vevey. That is where the rock legends performed and that there is “other material Queen recorded with Bowie that never got released.” Hince claims that “somewhere there’s an archive” full of this stuff — which consists of “some original songs they did together and also covers. They were just jamming in the studio and it all got recorded – ‘All the Young Dudes,’ ‘All the Way from Memphis’ and various rock classics. There’s stuff with Freddie and David singing together – proper full-length rock’n’roll tracks … Raw, but good.”

Queen guitarist Brian May confirms this long-lost music and said that there were more collabos between the iconic duo. He remembered that Bowie and Mercury “locked horns” while recording “Under Pressure.” “Sparks fly and that’s why it turned out so great,” May said. “Not all of what we did in those sessions has ever come to light, so there’s a thought.”

So where are these historic songs? They’re apparently locked away by an estate that doesn’t want them released for some reason. “I can categorically say I know that there were complete tracks, not mixed tracks, but fully formed songs that were done,” Hince told the Guardian. “Does it belong to the David Bowie estate or to Queen? That’s probably part of the reason these things have never come to light.”

We need these songs. How do you keep a recording session with two rock music legends locked away in some vault?

Let’s take a moment to be graced and appreciate the stunning vocal talents of Bowie and Mercury with the acapella version of “Under Pressure.”