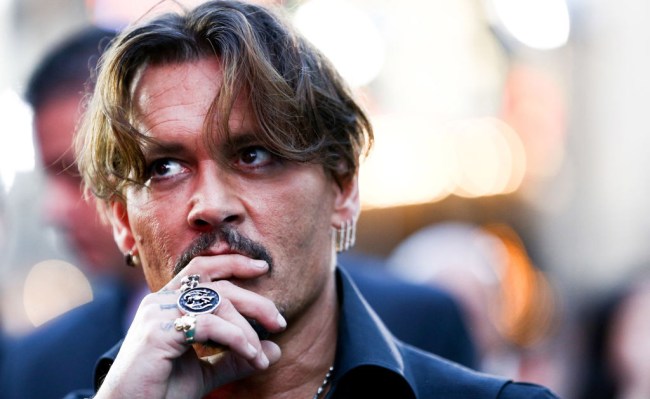 Pirates of the Caribbean star Johnny Depp and his former business managers at The Management Group (TMG) have been embroiled in litigation over whether or not the company mismanaged his earnings over the years. Depp claims that they owe him more than $25 million, while they claim that it was Depp’s extravagant spending that caused all of his financial hardship.

If you never thought you’d see the words “Depp” and “financial hardship” in the same sentence, you’re not alone. However, according to The Weekly Standard, it’s easy to see how those two things managed to converge…

The star’s extraordinary spending was said to include over $75 million on 14 homes, including a 45-acre chateau in the South of France, islands in the Bahamas, houses in Hollywood and Los Angeles and a Kentucky horse farm.

He spent $18 million buying and renovating a yacht, says the suit; $3 million to blast the ashes of writer Hunter S Thompson out of a custom-made cannon; $200,000 on private planes and $4 million on a failed record label.

He paid out tens of millions on “a massive and extremely expensive art collection” including works by Warhol, Basquiat and Modigliani, and “world class jewellery” as well as 70 collectible guitars.

“Depp lived an ultra-extravagant lifestyle that often knowingly cost Depp in excess of $2 million per month to maintain, which he simply could not afford,” lawyer Michael Kump wrote in the cross-complaint. “Depp, and Depp alone, is fully responsible for any financial turmoil he finds himself in today.”

You read that right. $2 million a month.

Now, in emails that just became public as a result of the litigation, we get to see just how bad things were at one point for Depp. Deadline published one email between Depp and TMG principal Joel Mandel which shows Depp knew that he was in trouble financially back in 2009.

I wanted to be sure to reach out to you, personally, before you left. Since my email to you in September, I have done what 1 was told you wanted done, meaning, “getting us through” financially until work could start again. The good news is that, so far, we have been able to do that. Notwithstanding, I need your help in a variety of ways. First, we need to “take it easy” on holiday spending. Second, we need to discuss some dollar limit in the upcoming Dillinger auction. Third, I need to be able to sit with you on your return from this trip, and before you leave for France, so that we can talk about where we are financially, what we have borrowed in order to sustain ourselves, what we have had to do to obtain those borrowings, what is now necessary to pay those borrowings back and, finally, to look realistically at income and expenses and to work together on how to make sure that these are back in balance.

I know that things are hectic for you at the moment, but know that I am available, day or night, if you want to discuss any of this now.

My best, and please travel safely…

first, thank you for dealing and getting me through. secondly, i am doing my very best on holiday spending, but there is only so much i can do, as i need to give my kiddies and famille as good a Christmas as possible, obviously within reason. but, regarding the plane situation,., i don’t have all that many options at the moment. a commercial flight with paparazzis in tow would be a fucking nightmare of monumental proportions.

know that i will be starting THE TOURIST, on or about the 15th of february; which will be 20 mil. i will then go, virtually, straight into PIRATCS 4, for 35 mil and then in turn to DARK SHADOWS for another 20 mil. i hope that by the amount that will be coming in from work in the coming year and also from back end proceeds, etc., will put everything straight.

what else can i do??? you want me to sell same art??? i will. you want me to sell something else??? sure… what??? boat is going to be chartered at new years and sony will then charter it for the TOURIST shoot in venice. other than that, i got bikes, cars, property, books, paintings and some semblance of a soul left, where would you like me to start???

i don’t like being in this situation, but there wasn’t a whole lot of choice, as THE RUM DIARY was a sacrifice we knew would be happening and the last proper paycheck was PUBLIC ENEMIES.

i will do my best, joel.

my love to you and yours=

Another email claims that Depp’s accounts, at one point, were overdrawn by nearly $4 million with him set to borrow $1.98 million from City National Bank.

So if the day ever comes where you wonder, “How did Johnny Depp ever go broke? Didn’t he make like a gazillion dollars?” you’ll have your answer.

You can check out TMG’s entire filing here.