Happy “Game of Thrones” Day!!! Let’s celebrate the return of your favorite fantasy TV show by learning what scene in “GoT” caused Khaleesi of the Great Grass Sea to yak up her Dothraki dried horse jerky. Emilia Clarke gave an interview to The Mirror where she revealed secrets about the hit HBO show as we eagerly await for the premiere of Season 7.

The Mother of Dragons revealed the one scene that made her toss her Targaryen cookies where Daenerys Stormborn is forced to eat a horse’s heart as part of a Dothraki pregnancy ceremony.

It was very helpful to be given something so truly disgusting to eat, so there wasn’t much acting required. They made the heart out of solidified jam but it tasted like bleach and raw pasta. I ate roughly 28 hearts throughout the days we filmed that scene. Fortunately, they gave me a spit bucket because I was vomiting in it quite often. 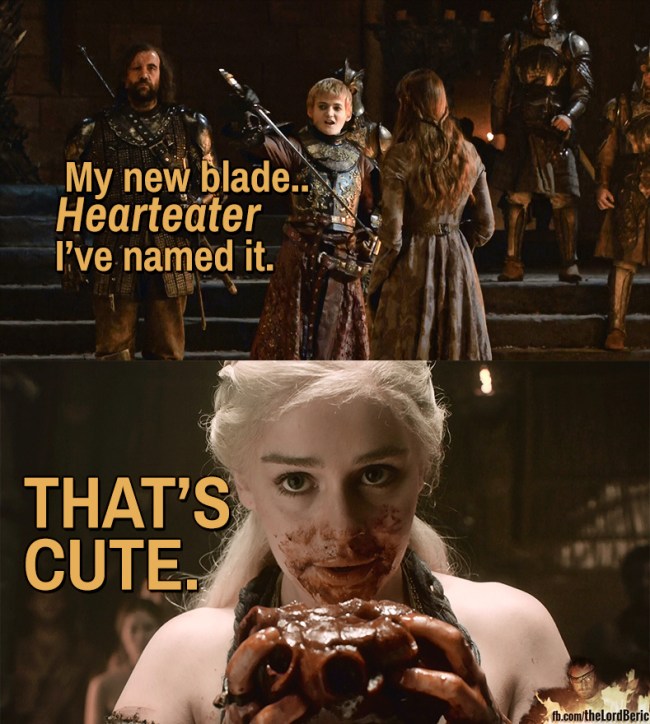 That’s when you warg into Cersei Lannister as she sips the finest Dornish wine.

Miss Clarke said that in Season 1 she “had a lot of trouble memorizing my Dothraki lines and I would put all these Post-It notes all over my apartment with different expressions and lines written on them.” But revealed t hat speaking “Valyrian is much easier because it has a more melodic quality to it. When you’re speaking Dothraki it’s more like you’re choking on your words.”

When asked what it’s like starring in the biggest TV show Emilia responded, “I certainly never imagined while I was working at this terrible call center that one day I would be getting a part in a massive series like this. I was petrified auditioning, but for some odd reason they decided to give this unknown girl a shot.”

Clarke was asked what her post-“Game of Thrones” plan is.

I want to continue working in theater – I love performing in front of an audience. Even a musical. I’m probably going to make my fair share of good and bad choices, but fate and luck are all part of the game. At the moment I just get so excited arriving at the Thrones set each day. It’s like beginning another great adventure.

Season 7 of “Game of Thrones” premieres tonight at 9 p.m. so get a well-cooked horse heart and a nice glass of Hippocras ready.