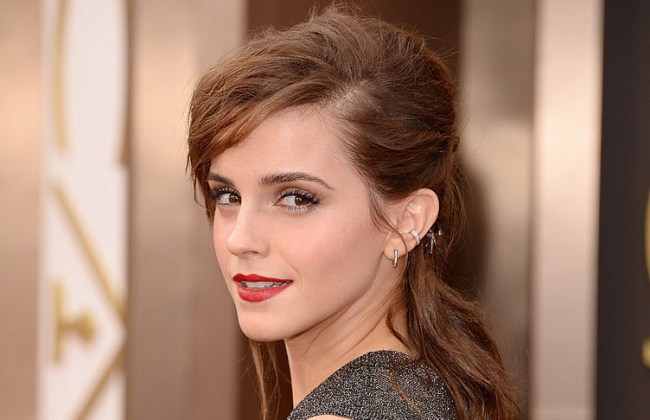 The last time we saw Emma Watson she was baring a whole bunch of boob for the latest issue of Vanity Fair.

Turns out, go figure, that there was also an accompanying interview to go along with those photos. Who woulda thunk it?

A lot of topics were covered in this interesting interview, but the most interesting part to me was Watson revealing the fact that, unlike most celebrities, she refuses to take selfies with fans.

What few people knew when she enrolled at Brown University in 2009 was that she had a desire to give up acting and walk away from Hollywood altogether. “I was finding this fame thing was getting to a point of no return,” she remembers. “I sensed if this was something I was ever going to step away from it was now or never.” She loved performance and telling stories, but she had to reckon with the consequences of “winning the lottery,” as she calls getting the part of Hermione, when she was nine years old and literally still losing baby teeth. As an adult, “it dawned on me that this is what you’re really signing up for.”

The question most people ask when a celebrity moans about being famous: If you hate the fanfare so much, why keep making movies? Watson asked herself that all the time. “I’ve been doing this since I was 10 or 11, and I’ve often thought, I’m so wrong for this job because I’m too serious; I’m a pain in the ass; I’m difficult; I don’t fit,” she says. “But as I’ve got older, I’ve realized, No! Taking on those battles, the smaller ones and the bigger ones, is who I am.”

She recently found the courage to say no to selfie-seekers. “For me, it’s the difference between being able to have a life and not. If someone takes a photograph of me and posts it, within two seconds they’ve created a marker of exactly where I am within 10 meters. They can see what I’m wearing and who I’m with. I just can’t give that tracking data.” Sometimes, she’ll decline a photo but offer up an autograph or even a chat — “I’ll say, ‘I will sit here and answer every single Harry Potter fandom question you have but I just can’t do a picture’” — and much of the time people don’t bother. “I have to carefully pick and choose my moment to interact,” she says. “When am I a celebrity sighting versus when am I going to make someone’s freakin’ week? Children I don’t say no to, for example.”

She makes a good point with regard to stalkers. Plus, as she also points out in the interview, “I have met fans that have my face tattooed on their body. I’ve met people who used the Harry Potter books to get through cancer. I don’t know how to explain it, but the Harry Potter phenomenon steps into a different zone. It crosses into obsession.”

Of course, if you’d like to get some life advice from Emma Watson she’s more than willing to give you some for $2 if you happen to be in Grand Central Station at the right time.

As for that boob-baring photo we mentioned, as is always the case with something good people had problems with it because we just can’t have ANYTHING nice anymore, I guess…

fuck Emma Watson for shaming Beyoncé and discrediting her feminism for being sexual; and then turning around to do a topless shoot though.

second of all emma watson has been ragging on women for showing their bodies for years. im sick and TIRED of white feminism

Then again, not everyone was angry. At least not at her…

@JuliaHB1 I don't always agree with her, but does exposing a body part really contradict feminist points?

It's possible to be a feminist and be proud of your body. Emma Watson doing a revealing photo shoot doesn't cancel out her feminist activism

People who complain about Emma Watson's feminism are only dying to complain. She's using her voice for something good.