Katy Perry Ranked Her Exes Orlando Bloom, John Mayer And Diplo On How Good They Were In Bed 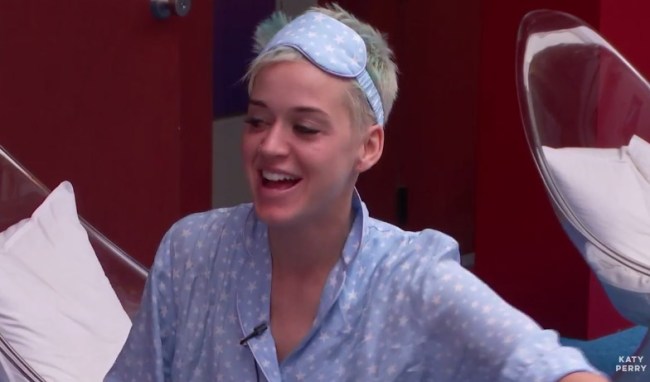 So, are you aware that Katy Perry is in the midst of a “Witness World Wide” 4-day live-stream on YouTube to promote her new album? If not, don’t feel bad, you haven’t missed much other than a glimpse of her butt and a great session of “Spill Your Guts” with James Corden.

For those unfamiliar, “Spill Your Guts” is pretty much like “Truth Or Dare” in which you either have to answer a question or eat something nasty.

Anyway, a couple of highlights came out of this session, both tangentially related to Orlando Bloom’s giant hog.

Have you ever texted someone a picture of your penis?

I’ve never done that, but I do not have the sort of penis that we all know that you’re used to after the old paddleboards… If I had that, if I was packing that sort of heat I wouldn’t have a photo that didn’t have my penis in it.

Later, Perry was faced with either eating a 1,000-year-old egg or answering this question from Corden about three of her ex-boyfriends, “From best to worst in bed, rank John Mayer, Diplo and Orlando Bloom.”

“No, no, no, no, I will not do that!” shouted Perry, followed by, “They’re all amazing lovers and I would have sex with all of them after I get out of this place!”

Corden then tried to give her an out, “Let’s just say they’re all in your top three…”

Then Perry shocked him by replying, “Um, are they? Josh Groban is in there.”

Katy clarified that she was joking, “No, he’s not in there. But I do want to say, people always ask me who the song, The One That Got Away, is about. That’s Groban.”

Finally, they got back to the original question. “Just give me a 1, 2, 3,” asked Corden again. “I think Diplo is third because I think there’s a reason people become DJs. Then Mayer, then Bloom?”

Perry shook her head no, so Corden followed up with, “Bloom then Mayer?” to which she then nodded yes.

“Oh there it is!” shouted Corden. “But we’re saying all three are exceptional.”

Here are a few more highlights from Perry’s live-stream so far. None have been as good as that, but what else do you have to do today? Work? Pfft…