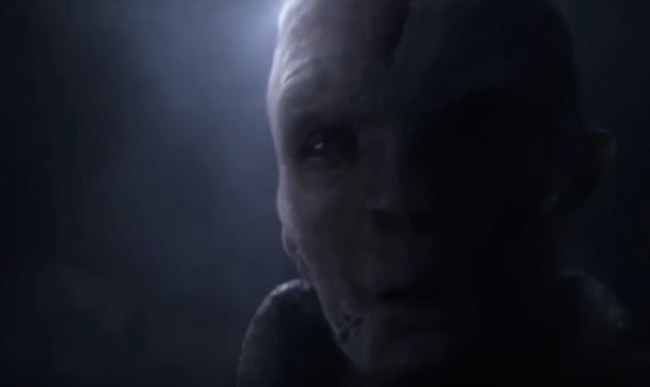 In Star Wars: The Force Awakens we were all introduced to Supreme Leader Snoke. He’s a menacing character with a huge crack across his forehead.He is also a character that orders around Kylo Ren and appears to be calling all the shots.

This was a bit of a shock for Star Wars fans, to be encountered with a new ‘Head Dickhead In Charge’ without any information about who he is or where he came from. Since The Force Awakens very first hit screens people have been wracking their brains to come up with theories on who Supreme Leader Snoke is, and why he’s so important. Well, this theory below makes so much sense it might just be legit.

The latest and most intriguing Snoke theory to date comes to us by way of UPROXX, where they tracked down a Redditor’s theory:

It was pretty cool how we saw Jedha in Rogue One. But was there also a strategic reason? What if we are supposed to get in the mindset that the Jedi order is very, very ancient? In one of the most recent star wars novels, Palpatine sends someone to Jakku to uncover an ancient secret. In The Force Awakens, we see that luke is looking for the original Jedi temple. What’s with this sudden obsession with Jedi history? In the force Awakens novel, Snoke reveals that he is very old. But we don’t know how ancient he is.
Kylo Ren’s lightsaber is confirmed to be an ancient version of the lightsaber. Where did he get it? Snoke.
Now keep in mind the title of episode 8, the last Jedi. What if we are learning about early Jedi because we are going to find out how different the ancient Jedi order is? What if what we know as Jedi are not really Jedi after all? What if Snoke is the last Jedi, in its original form?
It makes sense that we are learning about early Jedi. It makes sense that Kylo Ren has this ancient version of the weapon. It makes sense that luke went to look for the original Jedi temple in order to learn about Snoke.

Could this be the connection that we’ve all been seeking? Is Snoke potentially one of the oldest Jedi warriors on the planet, a character that possesses ancient power. Did Luke not like what he found when he discovered the original Jedi Temple? The word ‘Jedi’ itself can be plural, so The Last Jedi could be referring to the previous group of Jedi warriors…Not necessarily one individual.

Snoke will definitely feature prominently in the upcoming films and it appears as if one Redditor might have deciphered Snoke’s forthcoming role…What do you bros think, is this legit?