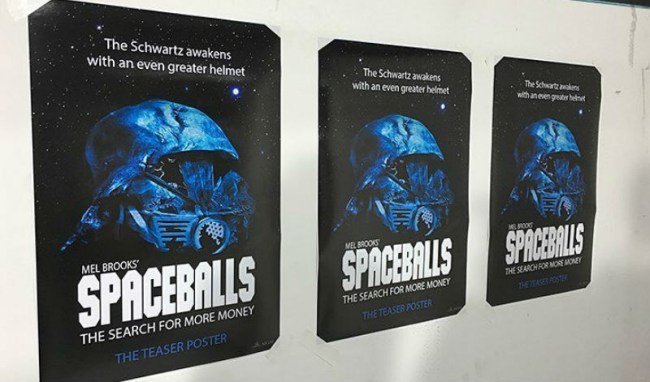 There has been an onslaught of Star Wars movies recently, starting in 2015 with The Force Awakens followed by the spin-off Rogue One and soon we will have The Last Jedi which hits theaters this December. Plus there will be an Episode IX as well as two standalone films featuring Han Solo and Boba Fett. With the saturation of Star Wars movies now and in the future, it definitely makes sense for a sequel to Spaceballs. On Sunday night at a screening of Young Frankenstein, Spaceballs director and actor Mel Brooks said that a sequel to the iconic Star Wars could be a reality.

During a Q&A session, Brooks said that he is in talks with Metro-Goldwyn-Mayer Studios for a Spaceballs sequel, thanks to the resurgence in Star Wars popularity and success.

“Well, you know, I’m doing it. MGM is slightly interested in doing it because of Star Wars Rogue One and The Force Awakens and the new Star Wars explosion,” Brooks told the audience. “So they think maybe, so we’re talking, who knows.”

So… will there be a Spaceballs 2?! #MelBrooks says… pic.twitter.com/Ei89hTJLD7

Spaceballs was released in 1987 and has developed a devout cult following over the years who have been clamoring for Spaceballs 2.

Don’t get too excited though, the great Mel Brooks turns 91-years-old next month. Plus several actors from the original have died including John Candy, Joan Rivers, and Dick Van Patten. Plus Rick Moranis AKA Dark Helmet hasn’t appeared in a movie in over 20 years.

“Well, we better get going. I wonder, will we ever see each other again?”

“Who knows? God willing, we’ll all meet again in Spaceballs II: The Search for More Money.”