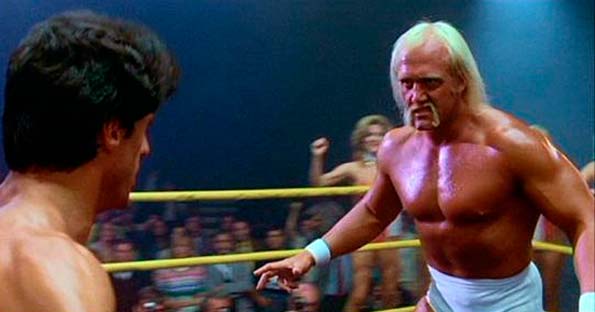 Every so often, Sylvester Stallone dips into his vault of memories and shares awesome rare photos from Rocky that most have never seen. You can see previous released photos HERE and HERE.

This week, Sly Stallone shared some old school photos from his Rocky movies on his Instagram.

Just came across a very super Rare photo and would like to share with you all and wish Carl Weathers good luck starring in a new TV show "Chicago justice"!

Flying high Now !!!!!! Sorry to go back in time but I've never seen this one either and I just thought I'd share . This was from one of the flights during the opening montage in Rocky three when we first introduced the song " EYE OF THE TIGER" this was a real fighter who is paid a goodly sum to take a flying right hook .. I wanted to make it realistic, but I actually felt bad afterwards.

He also shared a photo of Hulk Hogan from his iconic appearance in Rocky III. The Hulkster, who was Thuderlips in the movie, is seen hoisting Rocky Balboa over his head and getting ready to bodyslam the boxer.

Stallone explains the incredible photo on the Instagram post, including the story of how Thunderlips destroyed him:

Another flashback and another reason why it’s not such a great idea to always do your own stunts! I met Terry Bollea aka THUNDERLIPS aka HULK HOGAN In the very early 80s when I was directing Rocky III. AT 6feet 7 and 295 pounds with 24 inch biceps! He was an amazing athlete! Incredibly powerful. I remember a violent move where he threw me into the corner, charged across the ring like an ENRAGED bull and leaped so amazingly high Above me, that his shinbone actually came down giant tree on my collarbone, and I tumbled to the floor. I was afraid to look at my shoulder for about 10 minutes … I said “don’t roll me over, don’t move me,” because I was sure there was bone protruding through my upper chest! Of course there wasn’t but I have never felt such a mind numbing pain from a massive hit before or since that day! HULK Just didn’t know his own strength. Believe it or not when he jumped into the audience to fight with the stuntmen, three of them had to be treated at the hospital. Great guy, great friend, his presence made the Film very very special. HULK, if you’re reading this, it was a privilege to be mangled by such a gentleman.

Sending three men to the hospital is probably why Hulk Hogan didn’t work in another big movie until eight years later in 1990 when he appeared in Gremlins 2: The New Batch.