Toby Keith Is Performing The Lamest Concert Ever: A Booze-Free, Men-Only Sausage Fest In Saudi Arabia During Trump’s Visit 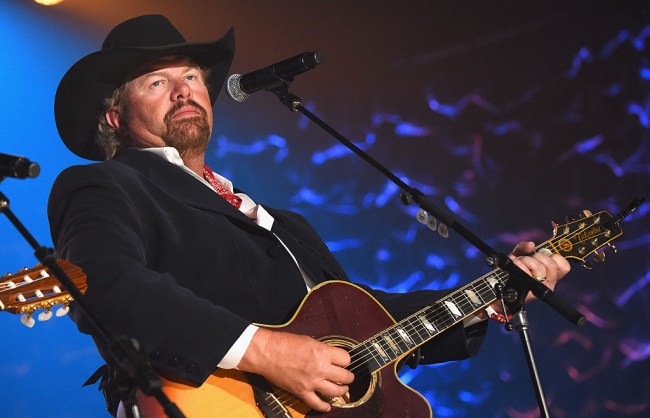 Toby Keith — the country star behind songs like “I Love This Bar” and “Drunk Americans” and “Red Solo Cup” — is a big Donald Trump fanboy. He was one of the few people to perform at this “Make America Great Again!” welcome celebration at the Lincoln Memorial back in January, along with 3 Doors Down (lol). Now he’s going international with his homerism for the President, performing at a “men-only” concert in Saudi Arabia. The dude is LITERALLY playing a booze-free sausage fest, according to NBC News:

Keith, who played at Trump’s pre-inaugural celebration, will be performing in the Saudi capital of Riyadh on Saturday, his publicist confirmed to NBC News.

Saudi entertainment website Lammt, which is marketing the event, said Saturday’s concert would be free but open to men only. It will also feature an Arabian lute player.

Keith spokeswoman Elaine Schock said this would be the singer’s first time in the Arab kingdom — but offered “no comment” on the male-only aspect of the show.

Saudi Arabia adheres to an conservative interpretation of Islamic law: Alcohol is banned and unrelated men and women are segregated in public, and women are not even allowed to drive cars.

Just me or does that sound like the lamest concert ever? How are you gonna hoot and holler properly without booze?

Country music loves to scream and pander about ‘MURICA while jerking itself off to it’s ostentatious, vain displays of faux patriotism. Meanwhile, I can’t think of anything more vehemently un-American than a country star singing “I Love This Bar” to a crowd of only dudes where alcohol is banned.