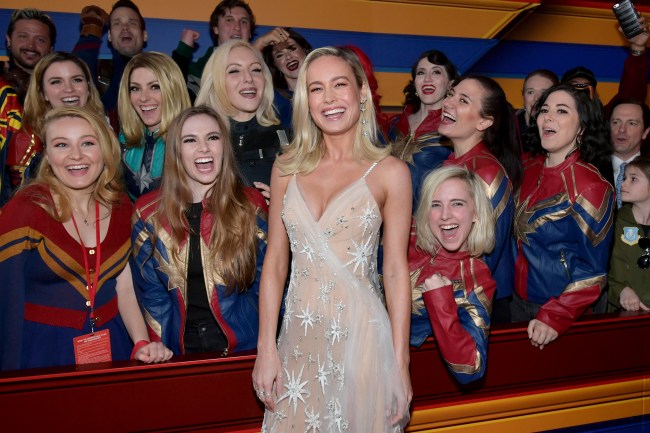 The red carpet premiere for Captain Marvel starring Brie Larson took place last weekend and the film officially hits theaters this week. Brie Larson looked immaculate on the red carpet and she looks like a total badass in the film, but this wasn’t always the case. She had to work her ass to get into shape for this role because she’s not the type of person who is naturally a fitness junky.

In order to get in shape for Captain Marvel, Brie Larson did what every Hollywood celebrity does, she hired one of the best personal trainers in LaLa Land. You might think with all of the money in the world that the personal trainer would have her doing some exercises and workouts from outer space, but you’d be wrong.

“It’s a bunch of crap to be honest,” he (her trainer) says of using moves like the Jeep stunt to get fit. “I don’t train people like that. We don’t flip tires. We don’t do burpees. Please don’t take [pushing a car] as a part of our training. We’re smart here.” (via)

She got fit, toned, and put on 15 pounds of pure muscle by sticking with some pretty basic exercises and she shared many of those on her Instagram feed over the past few months. In total, Brie Larson trained with trainer Jason Walsh for around 9 months and by the end of those 9 months she was able to deadlift 215-pounds, easily do 10 pull-ups, hip-thrust 400-pounds, and she performed many of her own stunts.

Walsh’s believes in training the body in natural movements:

“This was the way we were innately born to move, but as we get older, through sitting, bad training, postural stuff and injuries, it gets us away from these foundational movements,” he says. “People don’t want to do the groundwork. We do the groundwork.

“I make people earn the ability to do bad-ass exercises. You have to be really good at the technical aspect before we put weight into your hands.” (via)

While pushing a 5,000-pound Jeep isn’t exactly a ‘natural movement’ it is an exercise Brie Larson went viral for recently after sharing this clip on Instagram:

But her workouts mostly consisted of weightlifting (deadlifting, weighted hip thrusts, etc) and conditioning moves. The goal was to keep her body in flux too:

Once his clients master those movements, he adds in different variables such as heavier weights, more reps or faster tempos.

In addition to strength training, Walsh added in bursts of “conditioning” moves, designed to raise the heart rate and work the whole body, such as pushing a sled or squat jumps. He also prescribed the 30-minute classes at his Rise Nation studio in West Hollywood. It’s a non-impact workout done on a VersaClimber, a machine that keeps the user upright and mimics a vertical climb, to dance-worthy beats. (via)

In terms of diet, she stuck to a mostly Paleo diet but as the months wore on and her training progressed she cycled in rice and sweet potatoes as healthy carbohydrates. She’d also start every morning with a spoonful of creatine on her tongue that she’d wash down with water like Rocky sucking down the raw egg.

Here’s a look at a few of her routine exercises:

The weighted hip thrusts up to 400-pounds:

Deadlifting up to 215-pounds:

Push-ups with weighted chains on her back:

The film comes out this Thursday night (late) but really it comes out on Friday. The early reviews are pretty great, at least from the critics who I trust.

For more on Brie Larson’s workout routine, you can visit ThisIsInsider and/or the NYPost.