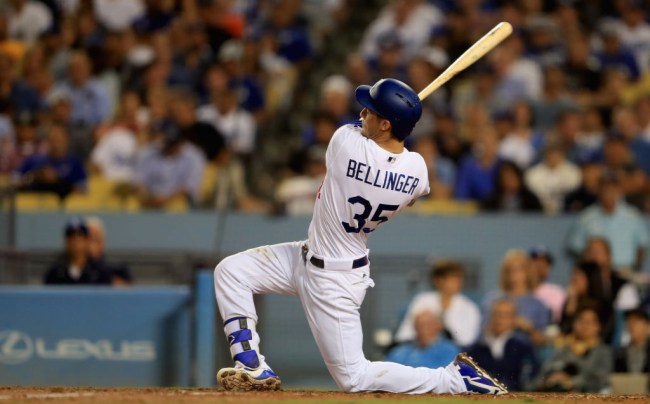 Cody Bellinger really had himself a year in 2017. Not only did the 22-year-old rookie help lead the Dodgers to their most wins since moving to Los Angeles with a league-leading 104 wins, he also broke a few records of his own along the way.

Bellinger, who played in the 2007 Little League World Series, is now set to compete in the 2017 NLCS after setting the the National League record for most home runs by a rookie with 39 and becoming the fastest player in MLB history to have four multi–home-run games (45 games).

So, besides having a father, Clay, who played in Major League Baseball, in the family, how did Bellinger do it?

According to an interview he did recently with Men’s Fitness, his workout and diet plans were a big part of his success.

As a high school player, Bellinger weighed in at around 175lbs, but by the time he got to the majors, he had bulked up to 213. Bellinger’s workout routine includes a wide range of methods, including squats, hex bar deadlifts, sled pulls, medicine ball throws, hurdle drills, battle rope workouts, landmines, and push-pull workouts.

“I work on my legs a lot—that’s where my power comes from,” Bellinger told Men’s Fitness. “Playing every day, your legs can get tired and you have to get your strength back under you. I usually start with squats and then go into Romanian deadlifts. My favorite training to do is when I’m working out my lower body.”

As far as how he stayed healthy in a season where teammates like Andre Ethier and Andrew Toles went down with injury?

“Core strength is so important—that, and working on your hamstrings,” Bellinger said. “You don’t want to have a pulled hamstring, so you’ve got to work them out as much as you can, even though they’re going to be sore the next day. Being a left-handed hitter, I’m normally twisting to the right, and so in the gym I try to counteract it. I do that by throwing the medicine ball against the wall, and twisting the other way just so I can even out my back, my spine, and my core.”

Incredible year, 104 wins. But in October, the only win that matters is the next one. Let's get it LA. @officialmetrx #HungerForMore #AD

Bellinger also discussed what his training routine is like during the off-season.

“In the off-season, I’ll use the bench press, dumbbells, or a bar for my upper-body workouts. You can’t go as heavy during the season, just because you don’t want to stiffen up. I’ll usually start with some pushups, then get in some TRX rows, and some normal rows, too. It’s more of a push/pull kind of workout. With legs I’ll use RDLs, squats, leg curls, and some med ball throws to get things going. This year I’ve also been doing a lot of core stretching, and laying-down stretches. It’s kind of like yoga, and it helps keep me flexible and loose.”

He also shared what are some of his favorite foods to incorporate into his training.

“With the Dodgers organization, everything is organic, so that’s great. Even when we’re on the road, our home chef cooks all organic, so it’s lots of organic chicken, rice, and salmon. We get pretty lucky over here. I really like the MET-Rx Cookie Crunch and the Apple Pie flavors. I think the Apple Pie tastes like a real apple pie, so I usually pop one of those in and get my workout going. The milkshakes are great for fueling up and recovering. It keeps the body healthy, and being an athlete that’s the biggest thing for me.

“I partnered with MET-Rx this year because it really helped me take my training and nutrition to the next level. It was the first year that I incorporated their products into my everyday routine, and it’s made a big impact. Now, before I even work out, I eat one of those MET-Rx Big 100 Protein bars. After the workout, I’ll use one of their high-protein milkshakes. It just really helps you complete your workout.”

As for his number one advice for guys working on their overall fitness? Much like WWE Superstar Chris Jericho, Bellinger says it’s just “staying on top of what you put in your body. You don’t want to put any junk in your body.”

Check out the rest of the interview over at Men’s Fitness.

And if you’re looking even more fitness and diet tips, check out what some of these celebrities do…