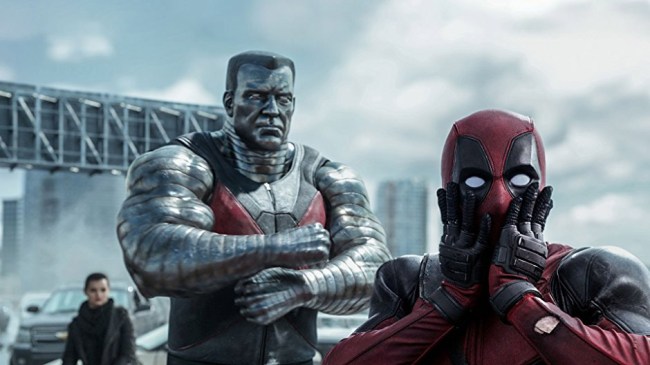 Turns out that Josh Brolin isn’t the only actor that’s ridiculously ripped for his role in Deadpool 2. Deadpool himself, Ryan Reynolds, has obviously been putting in some serious work in the weight room based on a photo his trainer Don Saladino shared to his Instagram account on Thursday.

The photo, showing a side-by-side of Reynolds both in and out of his Deadpool costume, is obviously a response to the creator of Cable, Rob Liefeld’s photo of just how jacked Josh Brolin is looking for his role as Deadpool’s running buddy.

“@joshbrolin , you still have some work to do. 😉,” Saladino captioned the photo.

I don’t know… even Reynolds has said that Brolin has been kicking his ass during filming. Easy to see why too…

As for how Ryan Reynolds has gotten so ripped, he shed a little bit of light on it in a new interview with Men’s Health and it has nothing to do with his cooking…

“I am not innovative in the kitchen,” Reynolds says. “If I cook, you’ll have a structure fire. The firemen will kick down our door, take my wife away, and give her a better life.”

That doesn’t mean he eats garbage though…

Reynolds eats “clean, whole foods” every two or three hours when he’s bulking for a role. But he stops short of Hugh Jackman’s Wolverine diet, which reportedly involved 6,000 calories, some of which were eaten at 2 a.m. “Hugh Jackman has a dedication to his craft that I’m afraid I don’t share. If I’m up at 2 in the morning, it’s because something has gone terribly wrong.”

Plus, he has worked with his trainer Don Saladino for eight years now…

“[Don] has programs that I can access online because when I’m shooting, my hours are so erratic. I don’t want to have to meet somebody at 4 in the morning in a dark gym. I just want to go when I can go.”

A quick look at Saladino’s Instagram account and you can quickly learn all sorts of tips and exercises that, while they may not make you look as handsome as Ryan Reynolds, they might just make you look as buff.

I mean if his workouts are good enough for Stranger Things star David Harbour and newcomer to the Deadpool film series Zazie Beetz, it’s good definitely good enough for us.