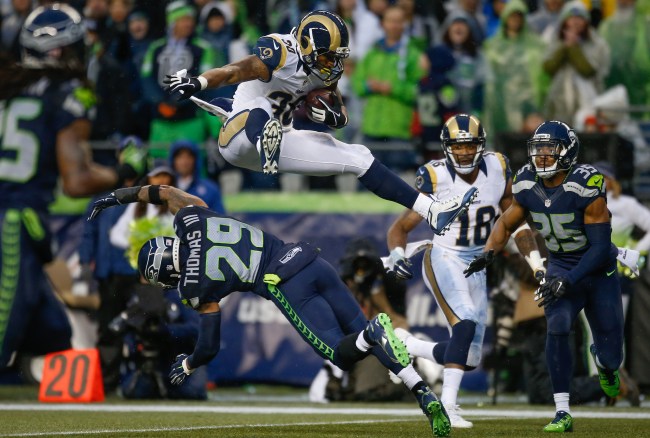 We are 57 days away from the first NFL game of the season (Falcons vs. Eagles on Thursday, September 6th). We’re days away from preseason training camp opening up across the NFL with players showing up, some out of shape and some in shape, to get ready for the 2018-2019 NFL season. Two of those players that are going to show up in peak physical condition is rookie Saquon Barkley of the New York Giants and Todd Gurley of the Los Angeles Rams.

They are both working with a trainer in California by the name of Travelle Gaines (‘Gaines’, such a perfect name for a trainer) who has the two running backs doing 315-pound deadlifts into 42-inch box jumps. Travelle shared his clip with SportsCenter‘s Twitter:

Saquon and Todd Gurley are getting after it. (via @travellegaines) pic.twitter.com/g04L4eGnnR

What’s the connection between Saquon Barkley and Todd Gurley? They’re both represented by Roc Nation Sports, the sports management division of Roc Nation founded by Jay-Z. So it’s not all that shocking that the two would be working out together. If I’m Saquon then I’m trying to shadow Gurley all Summer until it’s time to report to camp. It makes sense, right?