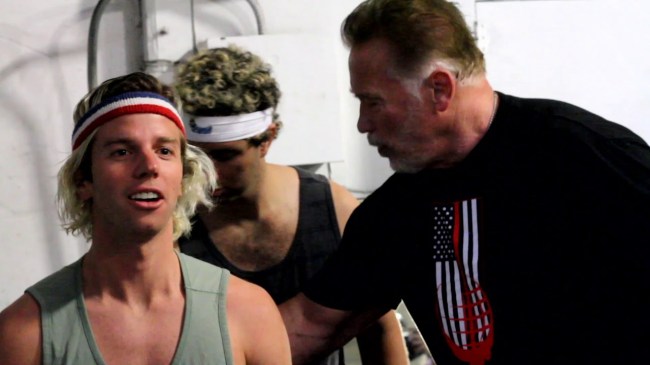 When I moved from New York to California a couple years ago, I had one goal and one goal only for my work here at BroBible: DO RAD SHIT. After years in a stuffy office dealing with dumb corporate politics over lunch, ad campaigns, and other unimportant bullshit, my headspace was razor-focused on making the most badass Bro content the world has ever seen; Stuff that makes you laugh and inspires you to be yourself, be confident, and inspires others to “visualize your success, then go do it,” in the wise words of Arnold Schwarzenegger.

I’m pretty stoked about how I was able to accomplish that this past January. A few days before the Arnold Strongman Pro World Series at the Santa Monica Pier, I got to connect my two favorite Bros from Chad Goes Deep with Gov. Arnold Schwarzenegger. I also took a tour of The Governator’s Office and got to hold the famous Conan the Barbarian sword (… it’s EXPECTEDLY heavy) and the movie-prop shotgun that Arnold flip-cocks in the original Terminator movie.

Get to the choppa, working on something extremely badass and for a great cause. pic.twitter.com/iASjMYq57O

As a child of the ’90s, this was a goddamn dream come true. From Kindergarten Cop to Total Recall to Last Action Hero, I practically grew up with Arnold on the screen, devouring these movies on Friday nights after NBA games with my dad.

Please pardon my not-even-humble brag here, but then something cooler happened. In a perfect blending of Bro worlds, I linked up the house-party loving Bros from Chad Goes Deep Bros with Arnold’s team for a lifting sesh at his ironic fitness stomping grounds, Gold’s Gym in Venice, California.

It was nothing short of epic to witness Chad and JT pump iron with the legend himself, all with the occasional one-liner.

Filmed back in January, the Chad Goes Deep dudes just released the video from this epic workout sesh earlier this week.

It gets me so stoked to see the dawgs do badass shit like this with a Bro who belongs on the Mt. Rushmore of all Bros.