Battlefield 2042 ATV: Why It Rules That Polaris Is Now The Official Off-Road Vehicle Of Battlefield 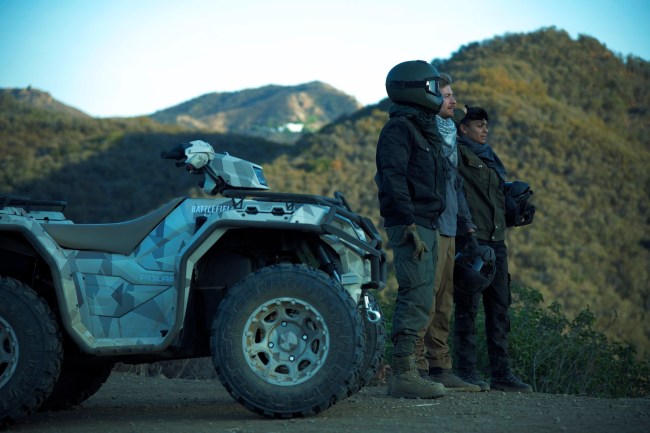 Have you noticed how huge the maps are in Battlefield 2042?

EA’s Battlefield franchise is notorious for large maps, which means tons of running around. But the maps in the most recent release of the game are truly ginormous – massive virtual arenas designed for battle royales with 128 players. All that playable digital terrain means you’ll have to do more than just hoof-it after a respawn.

You’ll have to find a ride if you’re going to join your squad in squirmish in a timely fashion.

That’s where Polaris comes in.

This means that the ATV you ride in the new Battlefield isn’t a generic four-wheeler made from a rendering that sat on a DICE developers’ hard drive since Battlefield V (… the last Battlefield game to feature a four-wheeler, aka the “quad bike.”).

Battlefield 2042 features an authentic rendering of a Polaris Sportsman ATV – designed in collaboration between the companies to stay true to the engineering of one of the world’s most iconic off-roading vehicles.

Accommodating up to two players in the game, the machine is intentionally built to overcome terrain and obstacles while navigating around the game’s war-ravaged maps.

Best of all? No clumsy doors to open, making you a potential target. Just get on, fire it up, and ride. 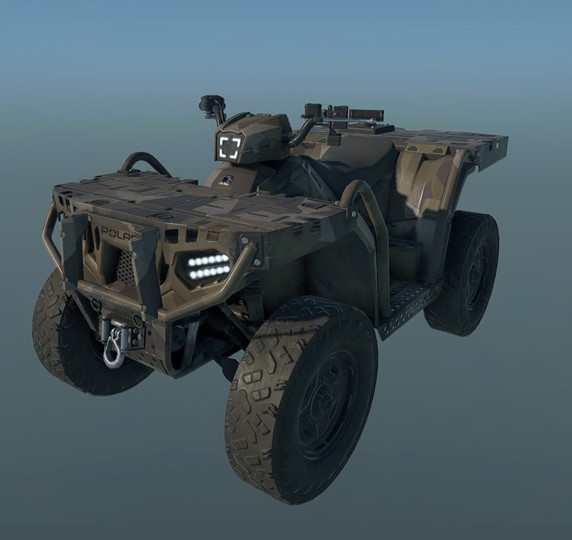 The Polaris partnership with EA DICE is the first-of-its-kind for the Minnesota-based Powersports company.

“Our partnership with Battlefield 2042 brings that real-life passion to a virtual world to help enhance the player’s experience and ability,” says Holly Spaeth, director, corporate branding and partnerships, Polaris. “As gaming grows and diversifies, this partnership allows us to reach new and existing audiences with an authentic brand experience.”

To promote the partnership, Polaris released a gameplay video about “forging your own path” across the Battlefield 2042 maps, as well as out here in the real world.

It’s a true metaverse where the vehicle used in the game has just as much function (… and, if you’ve ever driven a Polaris, as much fun) in the true outdoors.

The video game vehicle experience has come a long way over the years. Even in futuristic FPS games, gamers are forced to suspend their disbelief about a machine and its utility in the real world. Part of the joy of gaming is a virtual experience with a vehicle that you’d never get to drive on an actual road or trail.

Think about it: Very few gamers will ever get behind the controls of something like a Hovercraft or M1A5 tank, two marquee terrestrial vehicles baked into Battlefield 2042 itself. Since they’re designed explicitly for military use, the gameplay experience with these vehicles is simply part of the fun and escapism of gaming itself.

You don’t even have to own one to experience the fun of an off-road adventure.

With over 160 outfitters in the United States, Polaris Adventures offers turnkey off-roading experiences that cater to all skill levels. This means you can kick the tires on the trail in a variety of Polaris off-road vehicles, whether you’re a first-time rider or an experienced powersports enthusiast.

Also, as part of the partnership, Polaris also brought the ATV in the game to life. 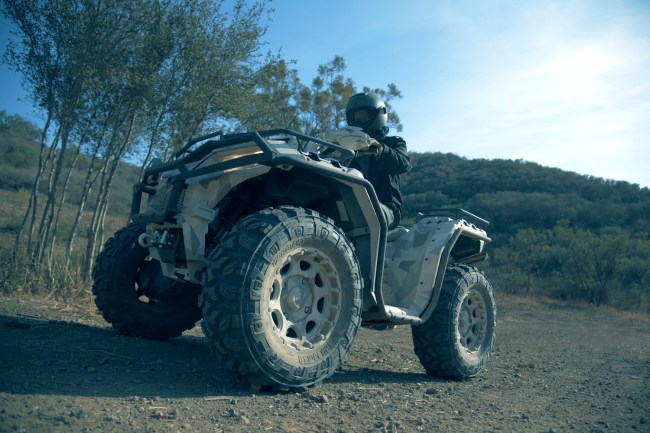 One lucky grand prize winner will win a Battlefield™ 2042 -inspired Sportsman XP 1000, as featured in the game trailer above. The Battlefield 2042-inspired quad is hand-painted in an icy blue camo colorway to mirror the in-game vehicle, valued at nearly $30,000.

The giveaway is live now and run through January 3, 2022. More information on entry, prizes and eligibility can be found here. You can also score daily and weekly prizes from the partnership, including Battlefield™ 2042 games; Logitech® gaming accessories like a laptop, headset, keyboard and mouse; Polaris- and EA-branded merchandise; an AKRacing® gaming chair; and a video game console.

Is this for real?

I’ve seen it with my own two eyes.

Polaris recently invited us out for an off-roading day trip in the California desert. It was a blast; the ultimate out-of-office mid-week adventure.

First, we got a chance to check out the custom Battlefield 2042-themed Polaris Sportsman XP 1000 – check it out in the vlog below.

Then we saddled up in our Polaris RZRs for the trek. The 60-mile trail ride started in the Johnson Valley OHV, tucked in the Lucerne Valley just east of Big Bear. If you’re not familiar, Johnson Valley is the largest OHV area in the United States, with 188,000 acres of explorable terrain. Our Polaris RZR ride started at the Cougar Buttes, one of the most scenic off-roading areas in the American West. On the guided trip, we continued on a loop past dramatic rock slabs, boulders, steep red rocky mountains, rolling hills, open desert valleys, dry lake beds, and sandy washes.

Check out footage in my vlog from the day. And don’t forget to sign-up for a chance to win that Sportsman XP 1000.