#Affiliate Partner
BroBible may earn a commission if you buy a product or service via links in this article.
by Cass AndersonAugust 12, 2021 8:22 am 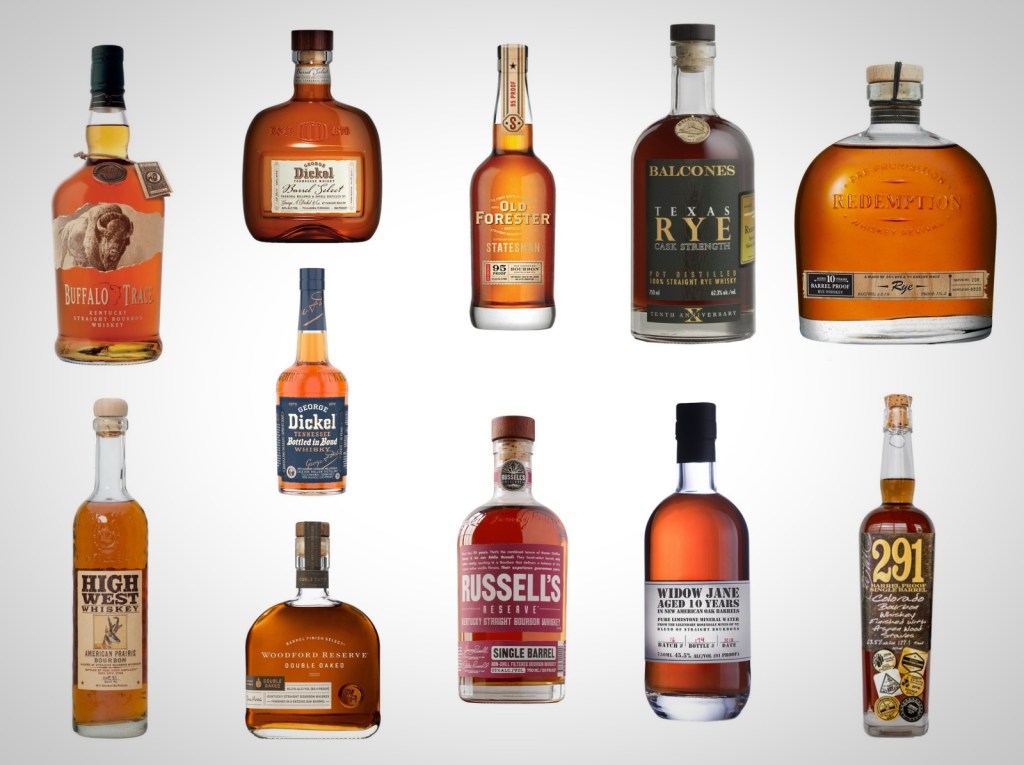 There’s no shortage of great Bourbon and Rye whiskey in America. This I know for sure. But getting your hand on the best Bourbon and Best Rye Whiskey releases as they become available can be impossible sometimes.

I considered putting together a calendar of the best new whiskey releases for Bourbon, Rye, and other American Whiskeys but settled on this instead. Instead, I opted for something that’s more evergreen and fits the whiskey world’s calendar a bit better.

This roundup of the best Rye and Bourbons out right now isn’t meant to reflect the hardest bottles to find. Spending every single trip to the liquor store in search of the ‘best bourbon’ your buddy told you about is a fruitless endeavor. You’re never going to find it. But you can find all of these best-in-class bourbons at reasonable price points.

This roundup is broken out into two sections where each has 11 whiskeys featured. 11 up Bourbons and Ryes up top and 11 more American whiskeys down below.

We kick if off with the Buffalo Trace Kentucky Straight Bourbon Whiskey [$33]. This is the most affordable Bourbon featured here and it’s also one of the best-known. The Buffalo Trace distillery has been making some of the best American whiskey for 200+ years and this is an excellent place to start tasting their full portfolio.

Don’t scroll past the Old Forester Statesman Kentucky Straight Bourbon [$59] without checking it out. The Statesman was awarded a 91.5-point rating at the International Whisky Competition and previously won a Double Gold Mdeal at the San Francisco World Spirits Competition. 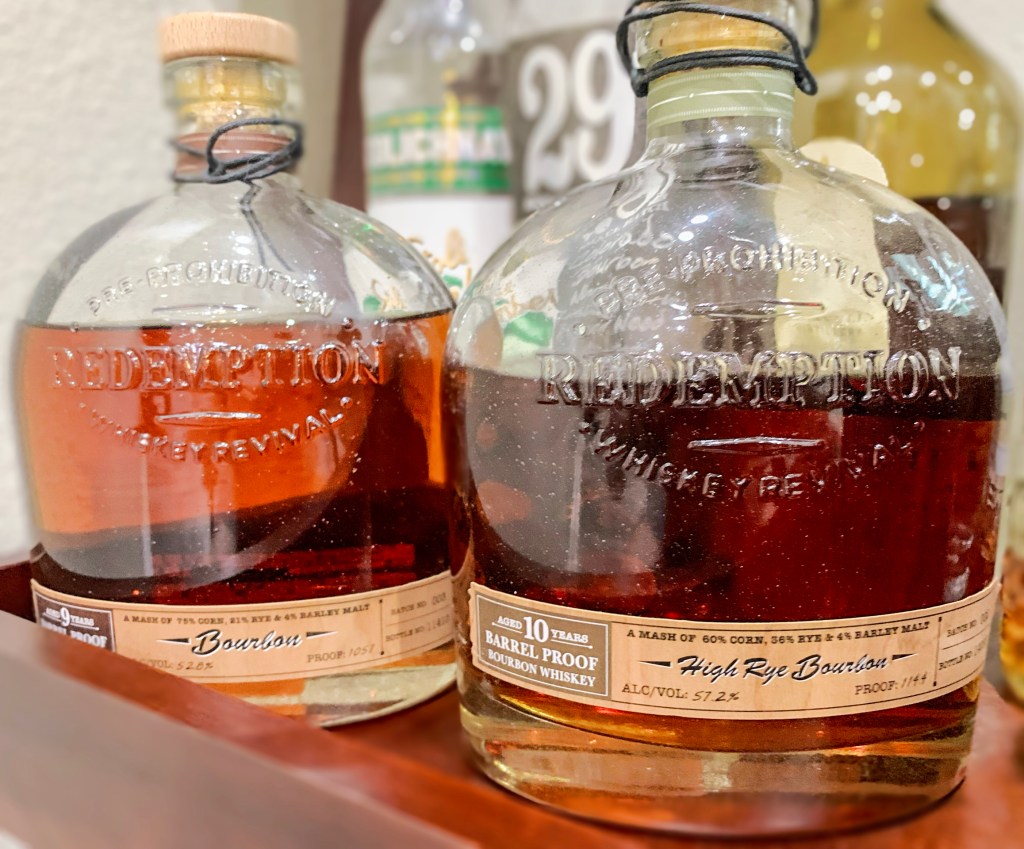 I’ve never stumbled across the Redemption 10-Year-Old Barrel Proof Rye Whiskey [$99] in the store but thankfully it’s availbe online at ReserveBar! This is also an older whiskey but it’s one you can still find if you look around for it. It’s bottled at 116.2-proof and features a mashbill of 95% Rye and 5% Malted Barley.

That interactive image below might be a better way to digest this. You can click on the bottle you’re interested in and that will take you to the landing page where you can potentially order it online. 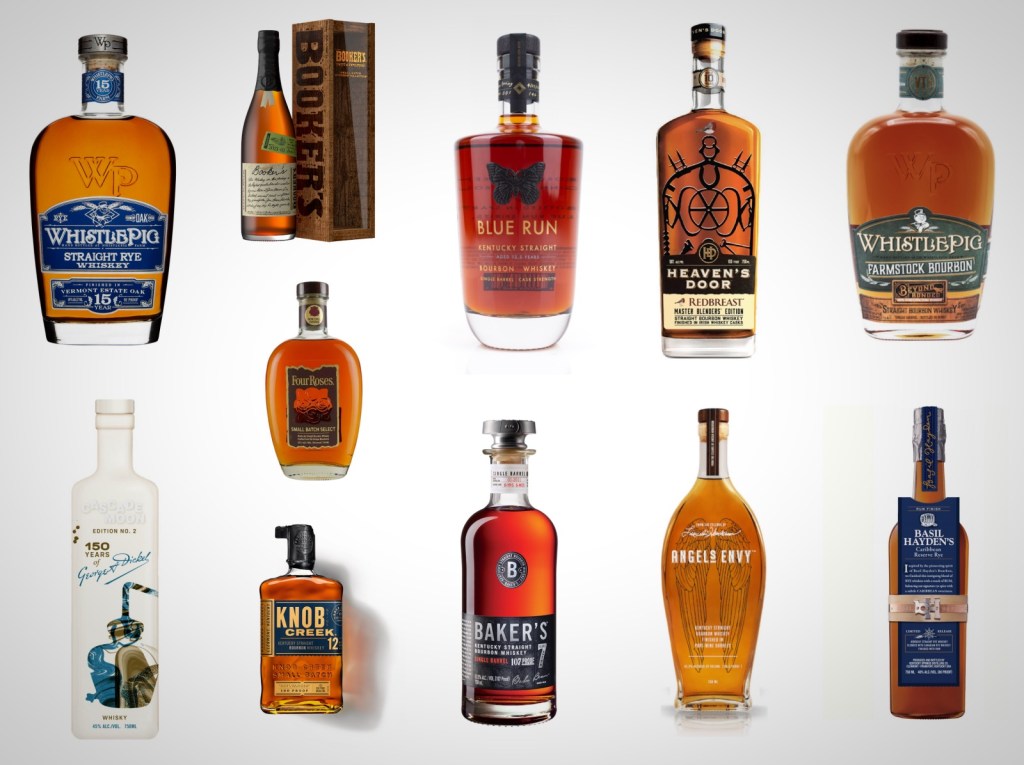 This is a murderer’s row of my favorite bourbons and ryes. The WhistlePig 15-Year Rye Whiskey [$239] is arguably my favorite pour on the planet. This 92-proof Rye from Vermont is one of the highest-rated Rye Whiskeys of all-time (97 points from Wine Enthusiast). I celebrate with this Rye and I turn to this Rye when I want to show a non-whiskey lover what they’re missing. If I close my eyes an envisioned the perfect Rye it would be WhistlePig’s 15-year but I understand the $239 price tag can be a lot.

I’ve listed the Booker’s Bourbon 2021-02 “Tagalong Batch” [$89] here for the latest from Bookers. but I have to admit that I truly fell in love with the Donohoe’s Batch which came earlier in the year. You can’t write a list of the Best Bourbons in America without mentioning Booker’s.

They’ve had a seat at the head of the table since Day 1. And if you’re curious how Booker’s Batch Bourbon came to exist then you’re in luck. I caught up with the man who was integral in the brand’s creation and it’s an awesome story that wll whiskey lovers will appreciate. 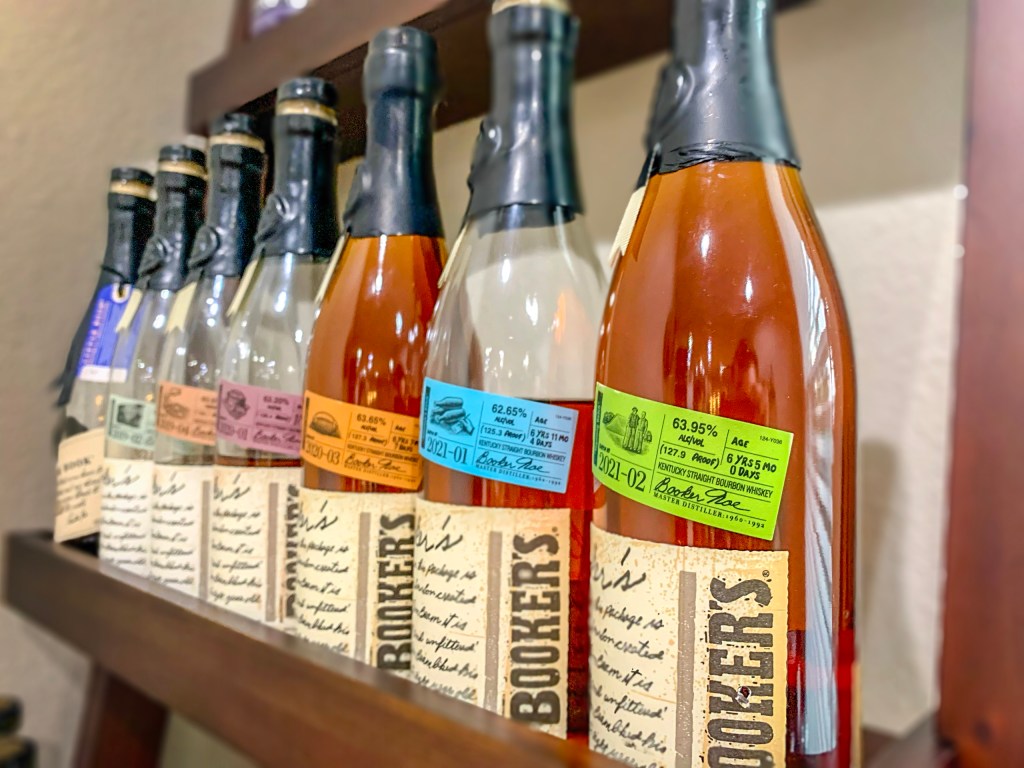 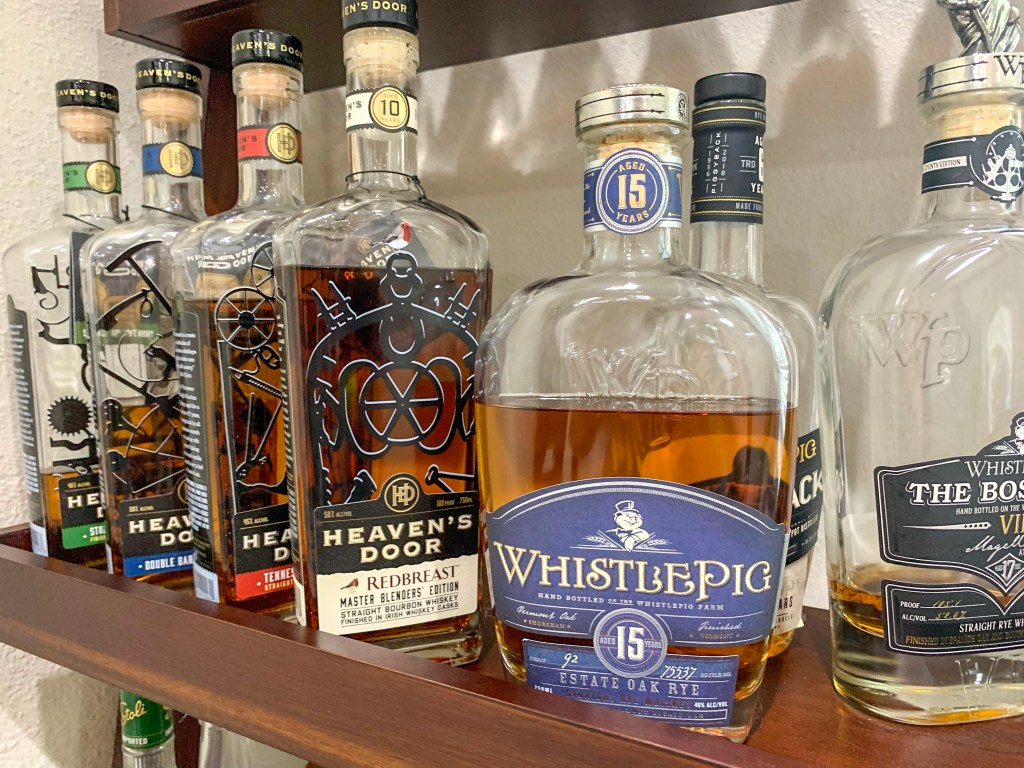 To give you an idea of how good the Heaven’s Door x Redbreast Master Blender’s Edition [$114] is, it was submitted it in an unmarked bottle to the 2021 San Francisco World Spirits Competition and it’s already been awarded a Double Gold medal in a blind taste test.

The whiskey itself is 10-Year Aged Heaven’s Door Bourbon that is finished in Redbreast’s world-renowned Single Pot Still Casks for 15 months. The flavors come together in pursuit of flavor perfection. This 100-proof Master Blenders’ Edition is perfect for hosting your next happy hour. It has complex dark red fruit notes on the nose and on the palate, you’ll get smooth notes of raisin, buttery goodness, walnut, nougat, and marzipan. The finish lingers with a touch of honey and Irish honeycomb sweetness. 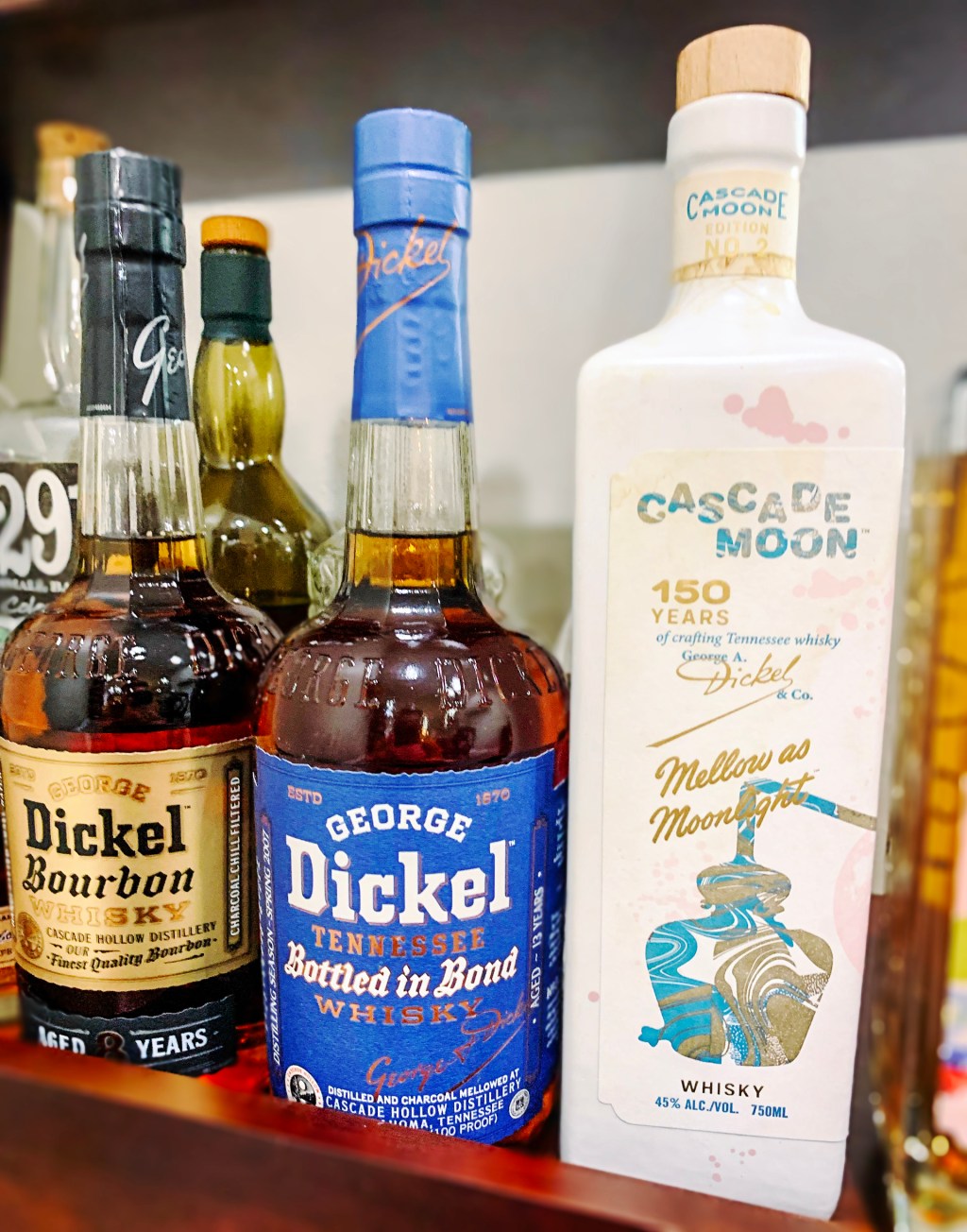 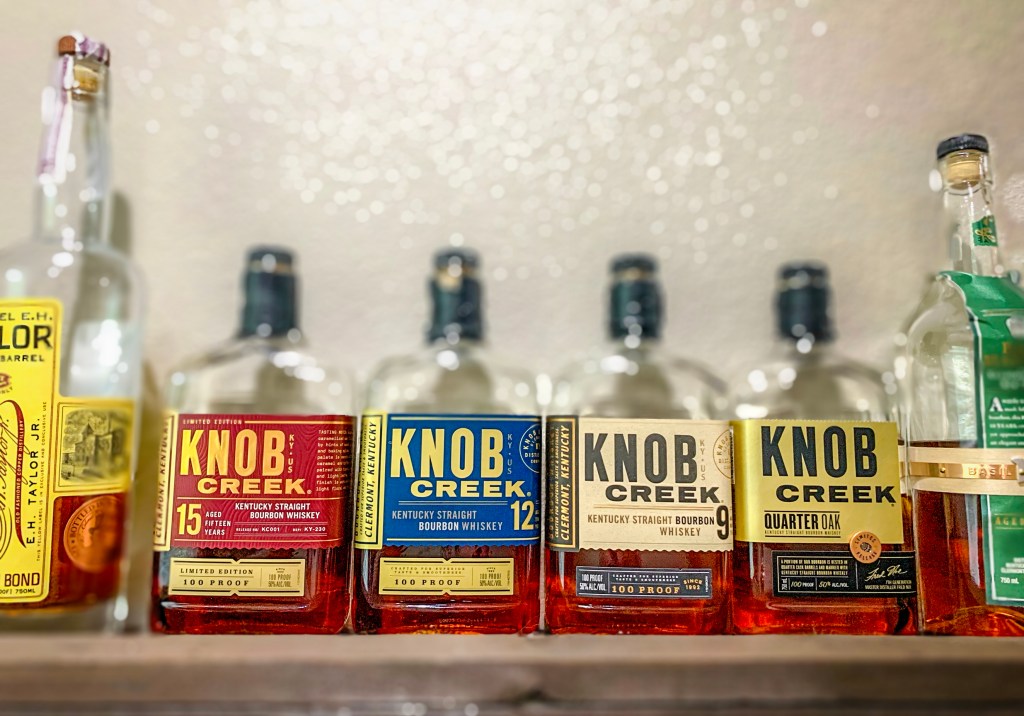 Here we check out the George Dickel Bottled in Bond Tennessee Whiskey 2007 [$50], the Cascade Moon No. 2 by Cascade Hollow Distilling, and the Knob Creek Straight Bourbon 12-Year [$69]. If you can’t tell by now these pictures were taken from my home bar. I’ve sampled or own almost every bottle featured in this article.

This collection of the Best Ryes and Bourbons available out there wasn’t put together arbitrarily. I tasted each and everyone of these and stand by these as the best picks out there right now. Some of these are seasonal and could be very hard to find. The prices of these Bourbons and Ryes runs across the full spectrum so you can find approachable and affordable options and high-end choices.

Below you’ll find an interactive image. If any of these new whiskey releases or best bourbons grabbed your attention just click on the bottle in the picture. That will take you to a landing page where you can see if it’s available for purchase online. 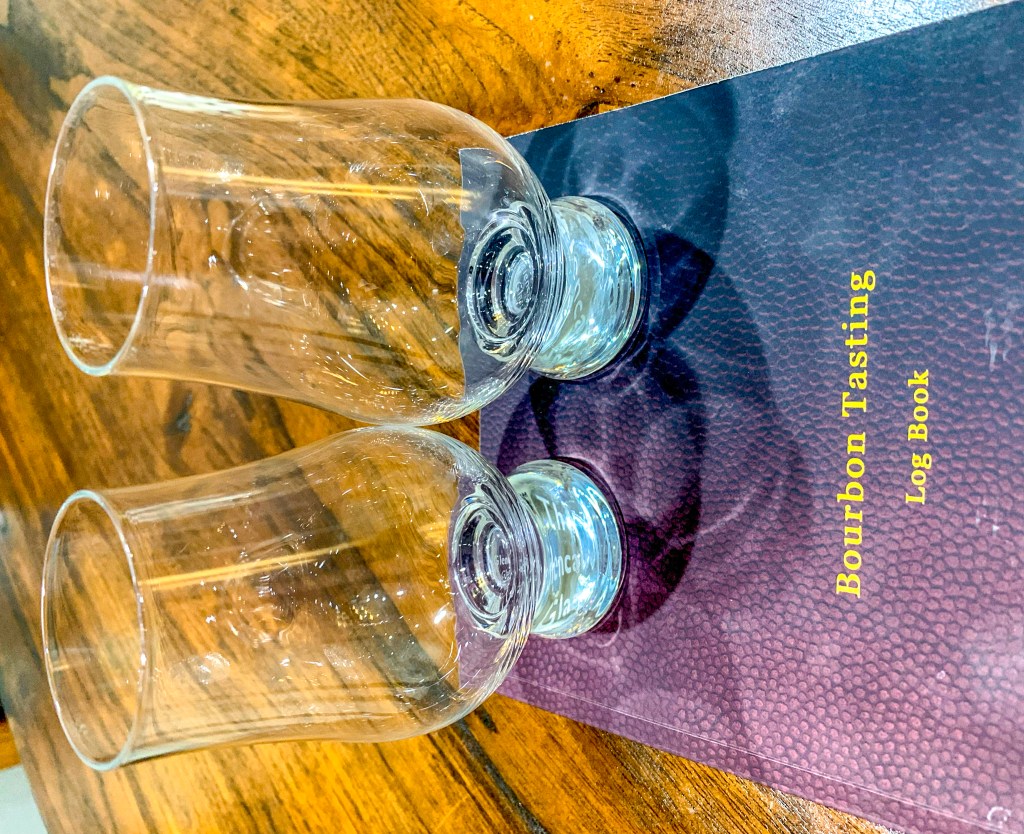 Lastly, two quick suggestions I’ll make before we get to the whiskey is picking these items. The Glencairn Whisky Glass, you can pick up a set of 4 on Amazon for pretty cheap. It’s the best whiskey-tasting glass around.

I’d also recommend picking up this Bourbon Tasting Log Book. It helps you log each Bourbon that you taste and helps you keep track of tasting notes and walks you through the flavor profiles with a useful flavor wheel.