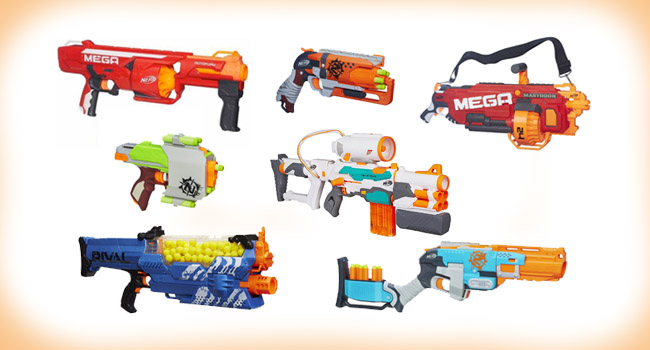 Nerf guns are a lot of fun for children, but you know who they’re even more fun for? Grown ass adults. That’s right, there’s little more satisfying than shooting your bro with little foam rockets. Thankfully, Nerf technology has grown over the years at a rate not seen since the days of NASA trying to get to the moon. There are all sorts of kickass Nerf guns out there, but none are better than these, the fifteen best Nerf guns for sale right now. 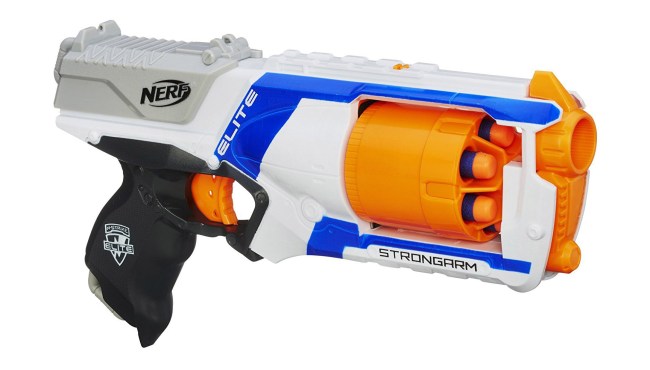 This little beauty is one of the most popular Nerf guns on Amazon, so popular that Amazon labels it as “Amazon’s choice” in the Nerf gun category. It’s easy to see why with a rotating barrel that holds six darts, all of which can be fired rapid-fire up to 90 feet. 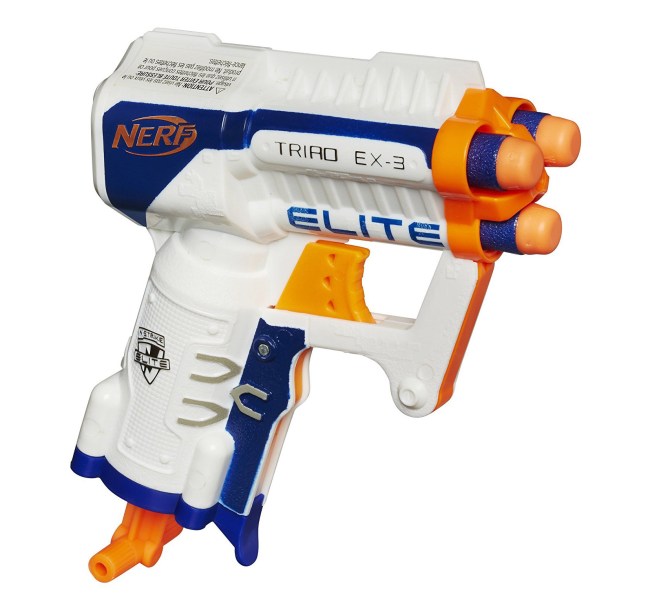 There are a lot of really elaborate Nerf guns out there, but sometimes something small and simple does the trick. This handheld blaster is great when you want something that you can maneuver around with. Basically, it’s no different than choosing a handgun over a shotgun. Only this handgun shoots foam darts at your bros and has three barrels that you can load up at the same time.

Mega CycloneShock! Now that’s a name! This Nerf gun features a rotating barrel that you fit with six Mega Whistler Darts – that’s right, they whistle! – that fly up to 90 feet. Let your friends have their puny darts. You’ve a got a Mega Dart, and it whistles. Uh, that’s what she said. 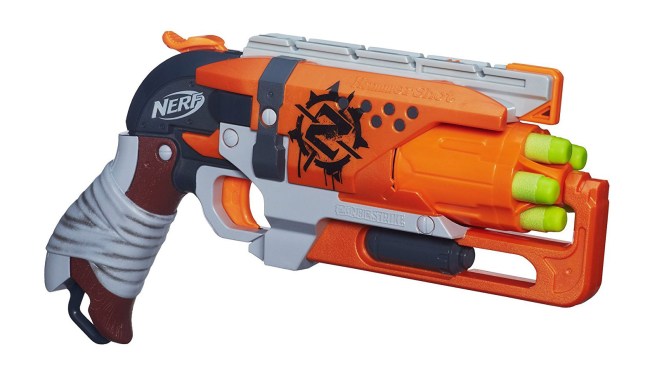 Great for those times when your bros turn into zombies (a.k.a. hungover), this five-dart blaster is fired like an old-fashioned hammer gun so you can go Dirty Harry on everyone. It also comes with stencils so you can decorate your gun. It’s an arts and crafts project *and* a Dirty Harry hangover gun.

This gun is cool because it gives you three guns in one. You’ve got a clip that loads 10 darts for the normal gun, four MEGA darts, and a giant foam missile fired by the gun’s attachable rocket launcher. A rocket launcher! God bless Nerf. 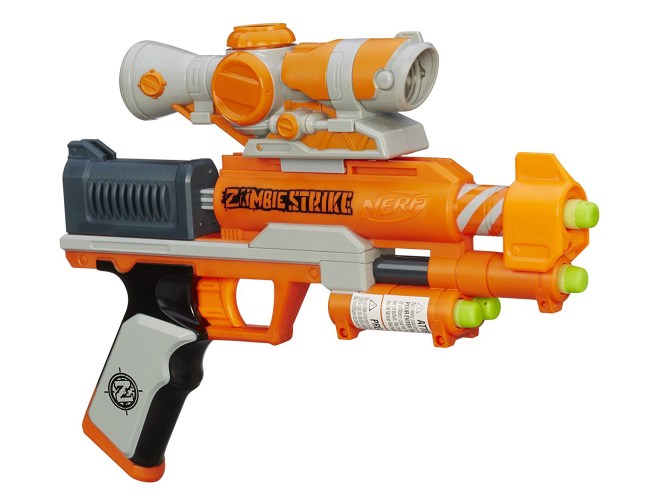 Back to hunting zombies again with this neat little hand-held blaster, which features four darts, and even cooler, a long-range targeting scope. Because you’re gonna need some distance between you and your bro when you start blasting him out of his hangover coma. 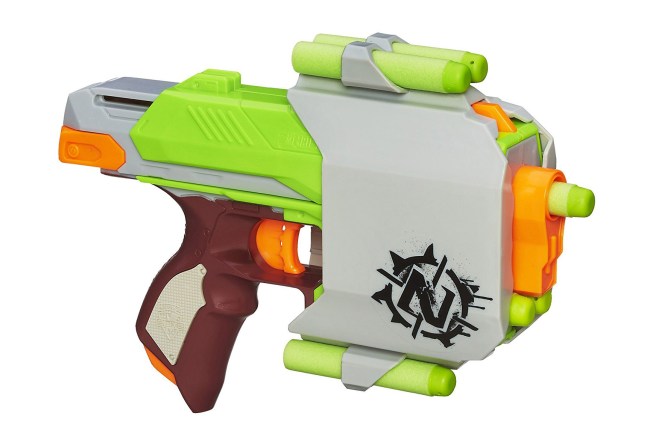 This gun is a ton of fun for one reason: it comes with a holster, which means that you can do quick-draw showdowns with your friends. Buy two for max fun and waste, er, I mean, enjoy hours of drunken quick-draw fun. Hell, make a drinking game out of it.

Okay, so this isn’t technically a Nerf gun, but it’s made to work with Nerf products, so I’ll allow it. It’s actually really cool because it’s a motorized Nerf gun (batteries sold separately) that fires a clip that holds ten Nerf darts. It’s a Nerf AK to satisfy your inner gangster. 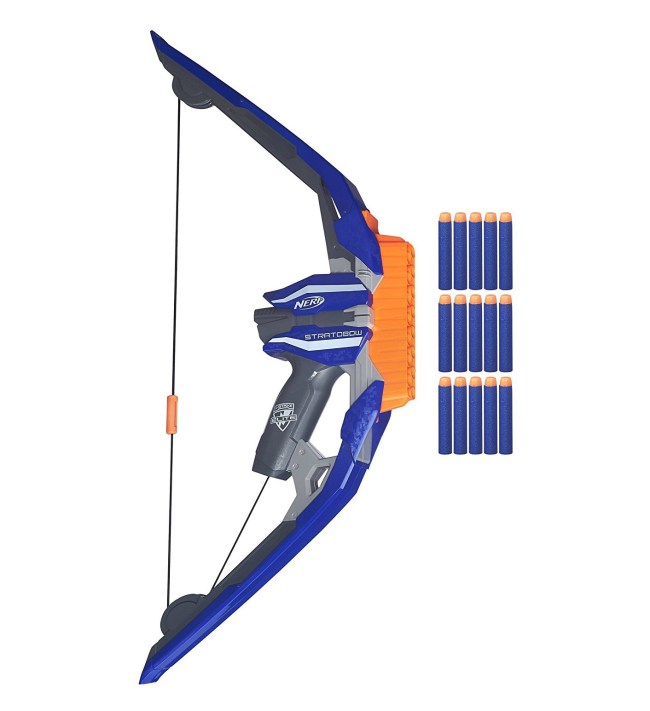 Is a bow a gun? Again, I’ll allow it. That’s because it basically does the same thing as a gun – it fires Nerf darts up to 85 feet at your idiot friends – only, you know, it’s a badass bow. Seriously, there’s just something baller about strutting around with a goddamn bow while all your friends have guns.

Okay, so this gun comes with three re-loadable shells that each hold three darts and when you fire it all three darts fire at once. It’s basically a Nerf shotgun. And it also comes with stencils so you can decorate your new Nerf sawed-off. 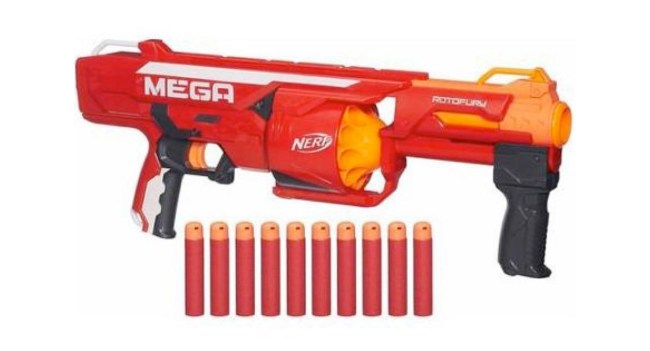 This badass gun features ten Mega Whistler Darts, all of which can be loaded at once and then fired on your overwhelmed friends with their puny single-shot guns. That’s so much whistling and Mega dart madness that your boys will end up with PTSD from this gun. 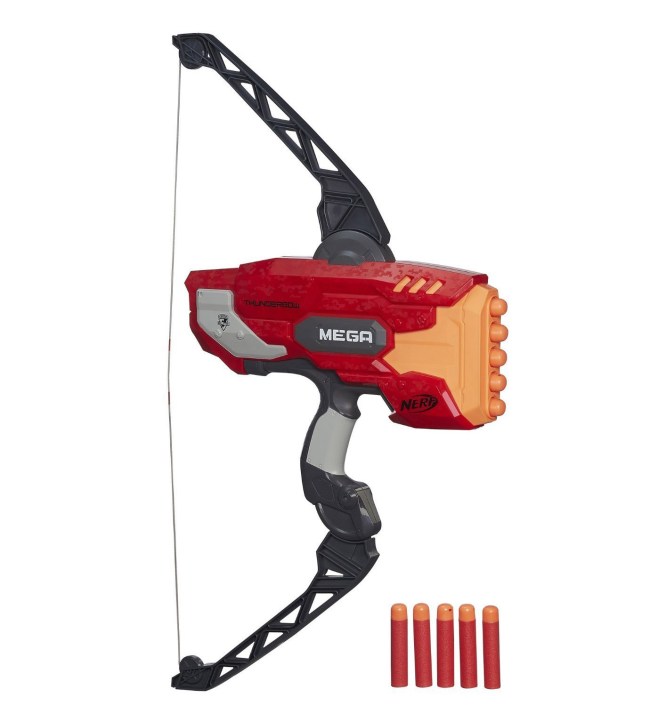 Yup, another bow. Only this one fires Mega Whistler Darts (it comes with ten) up to 100 feet. That’s a better range than most Nerf guns have. Great for hunting buffalo or drunks. 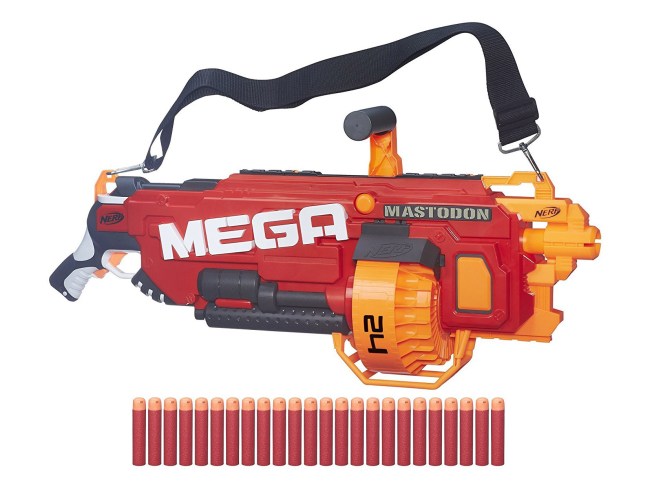 Look at this thing! It’s so big that not only does a single “Mega” not suffice, it needs a goddamn shoulder strap to carry it around. It’s mechanized, meaning you need six D batteries (not included) just to run it, and it fires 24 Mega Whistler Darts up to 100 feet. This is for when you need a mass Nerf shooting. I’m surprised Congress doesn’t regulate this or require a background check before you buy it. 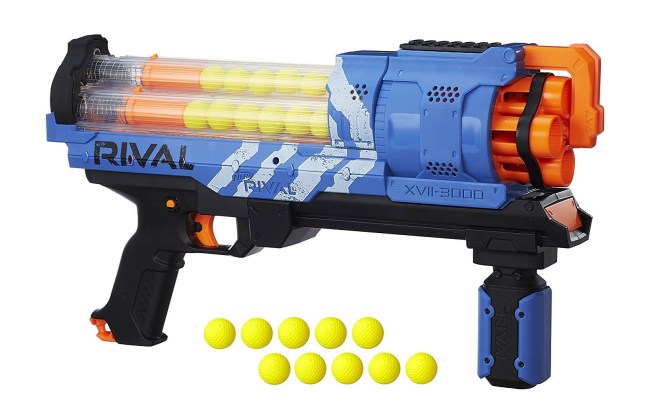 We’re getting out of control here. This Nerf gun is a high-capacity blaster that holds what Nerf calls “30 high-impact rounds.” High-impact Nerf rounds! What the hell is going on out there? Regardless, this is serious Nerf fire power that will let you dominate the day.

Okay, this is too much. This is basically a Nerf machine gun. It’s motorized (six D batteries sold separately) and features a hopper feed that holds countless high-impact rounds. Sold in blue and red, Nerf suggests buying more than one and holding war games style showdowns with your boys. My god, Nerf war games. What a country.