I Can’t Decide Which New TV Is Cooler, One That Rolls Itself Up And Disappears Or A 219-Inch Behemoth Called ‘The Wall’ 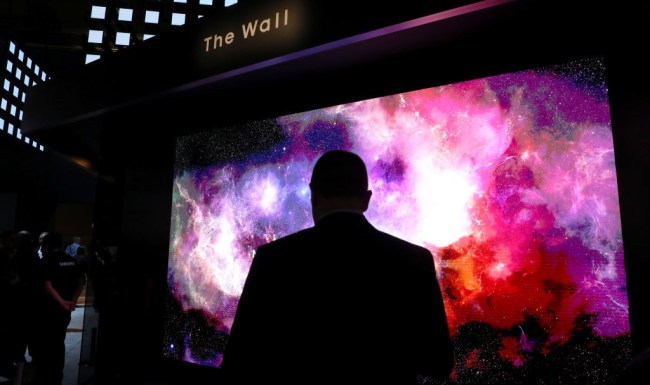 Ready to have your mind blown? Because the new LG OLED TV R and Samsung’s gigantic new 219-inch TV called “The Wall,” both introduced at CES 2019 in Las Vegas this week, are both an absolutely mind-blowing use of technology.

First off, you’ve got the new LG OLED TV R, where the R stands for rollable. As in this TV freaking rolls up and disappears when you aren’t using it. Yes, it literally rolls itself up.

According to CNBC’s Todd Hasleton, who saw it in-person…

When you want to watch TV, you hold a button on the remote and a panel on the base opens up while the TV starts to roll upward. The screen measures 65 inches and has all of the trimmings you expect from a high-end set, like a sharp 4K resolution and OLED panel, which means it gets really bright and has high contrast for viewing light and dark details.

It’s crazy thin, and when I looked at the back I thought it resembled window blinds unfolding. There are arms that run along the sides to hold the screen in place, too. I’ve never seen anything like it.

No shipping date or price was announced, but a LG spokesperson told him it is “supposed” to launch in the second half of 2019, probably close to the end of the year.

Second, we’ve got a new Samsung TV that is so ridiculously huge they call it “The Wall.”

“The Wall” is the world’s first 219-inch (that’s over 18 feet) micro LED television. And here’s the killer part… if you have an unlimited budget and the room to do it, you can make “The Wall” even bigger!

That’s because it also comes in a 75-inch modular version that you can snap together to make your TV as big as your heart desires. Even better, once they are put together, Samsung has made them so well that you hardly even see the seams. (Just check out the photo above.) In fact, it looks so clean, some theaters in both the U.S. and Korea are already using this technology.

So back to my original question: which one of these amazing new TVs is cooler?