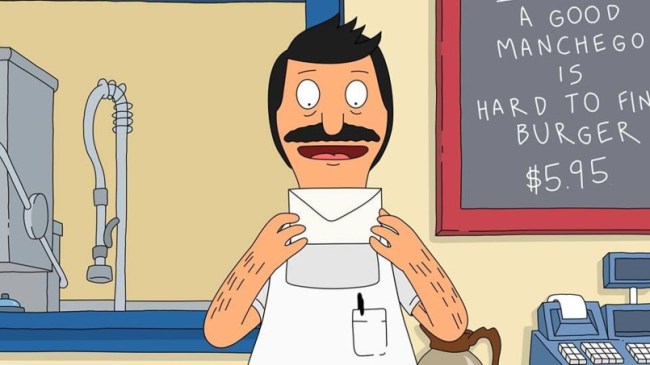 I spend a majority of my day alone. Alone with the television. We made out once. It was awkward.

Netflix keeps me company and I do a ton of binge watching, specifically sitcoms, because I don’t have to pay too close attention and the laughter helps to mask the tears of being alone. Basically, if I’m not reading some of the best comedy books I’m watching some of the funniest shows I completely missed the first time around.

A perfect example is Bob’s Burgers. I was late to the party with Bob but I’ve caught up. It’s one of the funniest shows on TV. The burgers on the blackboard crack me up every time. It wasn’t until recently that I realized someone put out a cookbook of those burgers.

The Bob’s Burgers Burger Book gives hungry fans their best chance to eat one of Bob Belcher’s beloved specialty Burgers of the Day in seventy-five original, practical recipes. With its warm, edgy humor, outstanding vocal cast, and signature musical numbers, Bob’s Burgers has become one of the most acclaimed and popular animated series on television, winning the 2014 Emmy Award for Outstanding Animated Program and inspiring a hit ongoing comic book and original sound track album.

Now fans can get the ultimate Bob’s Burgers experience at home with seventy-five straight from the show but actually edible Burgers of the Day. Recipes include the “Bleu is the Warmest Cheese Burger,” the “Bruschetta-Bout-It Burger,” and the “Shoot-Out at the OK-ra Corral Burger (comes with Fried Okra).” Serve the “Sweaty Palms Burger (comes with Hearts of Palm)” to your ultimate crush, just like Tina Belcher, or ponder modern American literature with the “I Know Why the Cajun Burger Sings Burger.”

Here are a couple of the burger names.

Poutine on the Ritz. Hilarious.