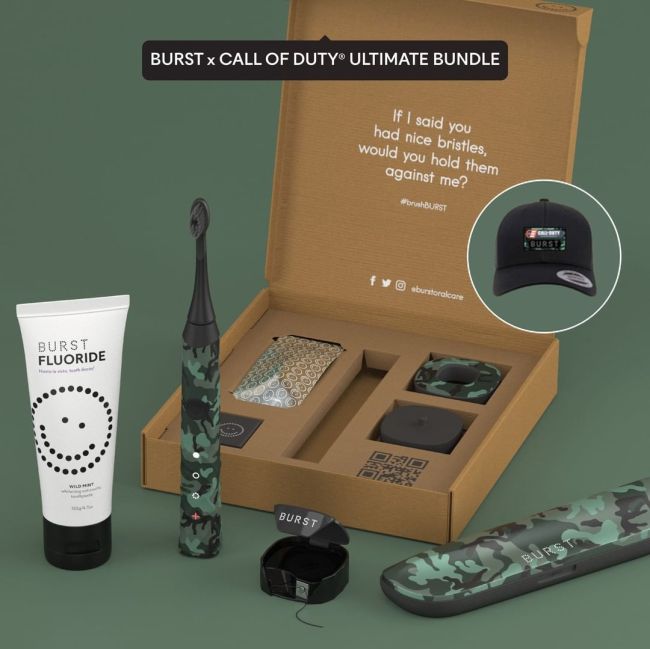 Presented in partnership with BURST…

Earlier this week was Veterans Day, meaning we got to honor those who have bravely served to protect the freedom of America. While we saluted all those who have proudly defended this country, it’s important to pay tribute to those men and women in other ways, too — and giving back is one of the best things to do.

That’s why BURST Oral Care has partnered with the Call of Duty Endowment (C.O.D.E.), a non-profit that supports veterans by helping them find high quality careers and preparing them for the job market, releasing a limited edition camouflage toothbrush that brings some serious vibes to your oral care routine.

Available both solo and as a bundle pack (which is 19% off and includes the Limited Edition Call of Duty Brush + Camo Case + Mint Eucalyptus Floss + Fluoride Mint Toothpaste + exclusive BURST X C.O.D.E. hat), this is a great way to show your support for America’s troops. With 20% of the proceeds from the camo brush going to C.O.D.E., you can feel even better when brushing your teeth with this badass BURST toothbrush.

Not only do you get BURST‘s industry leading 33,000 vibrations per minute, but you get a rare opportunity to pay homage to all the veterans out there who helped defend America. That’s pretty awesome.

Here are some other details you might want to know about BURST’s toothbrush.

The BURST x Call of Duty Endowment (C.O.D.E.) toothbrush won’t be around for long, so snatch yours up to show-off your American Pride each time you brush your teeth.

Lastly, with the upcoming release of the video game Call of Duty: Black Ops Cold War, players can support veterans in the U.S. and the U.K. find high-quality civilian career by purchasing the Call of Duty Endowment Challenger Pack, which is available now in-game and in Warzone in December.