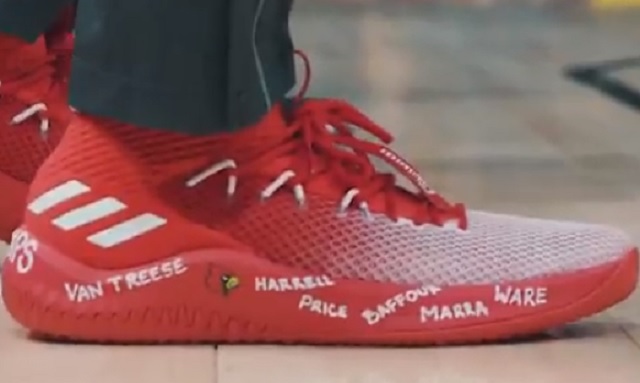 Utah Jazz rookie and former Louisville guard Donovan Mitchell has been an outspoken critic of the NCAA’s decision to strip the 2013 Louisville basketball team after an ex-assistant coach was discovered to being using escorts to lure in recruits.

Here is Mitchell’s reaction to Louisville getting their title stripped by the NCAA.

During last night’s Jazz game, Mitchell rocked some custom Adidas Dame 4’s made by Kickstradomis which had the names of the players who won the championship in 2013 inscribed on the shoes.

After the game, Mitchell talked about his decision to wear the sneakers.

“That’s just something that’ll forever be in Louisville history. It’s just one of those things where I looked up to those guys when I was at school, and I still do at Louisville, they’d come back and practice with us, give us advice on how to understand Coach P’s system. To see something like that, it’s awful to see. It’s terrible to see that you looked up to them to have that happen, so I just try to pay respect to them.”